What is inductive reasoning? 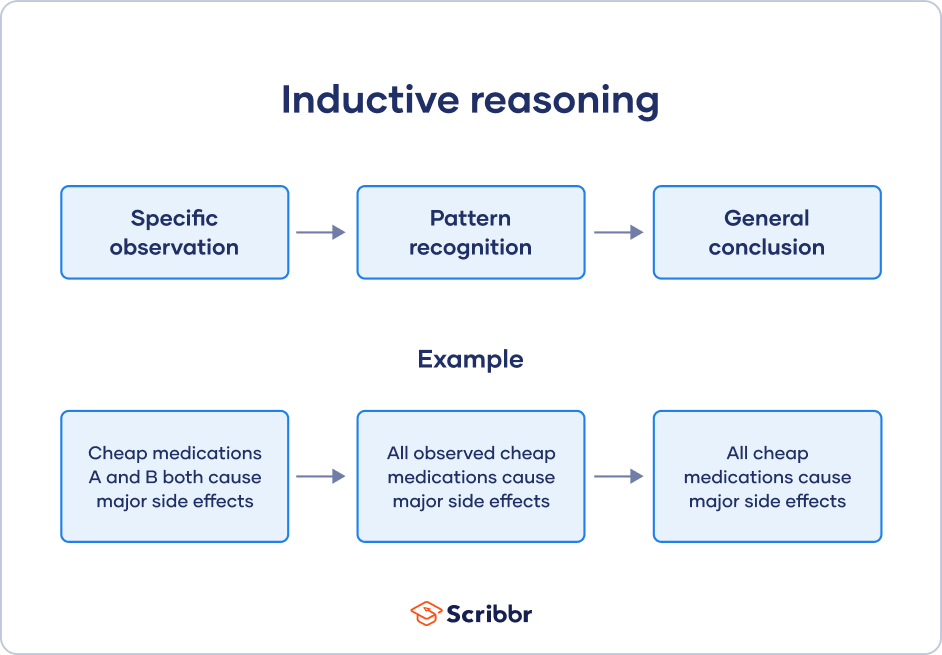 You may have come across inductive logic examples that come in a set of three statements. These start with one specific observation, add a general pattern, and end with a conclusion.

In inductive research, you start by making observations or gathering data. Then, you take a broad view of your data and search for patterns. Finally, you make general conclusions that you might incorporate into theories.

There are many different types of inductive reasoning that people use formally or informally, so we’ll cover just a few in this article:

Inductive reasoning generalizations can vary from weak to strong, depending on the number and quality of observations and arguments used.

Inductive generalizations use observations about a sample to come to a conclusion about the population it came from.

Using inductive reasoning, you infer a purely correlational relationship where nothing causes the other thing to occur. Instead, one event may act as a “sign” that another event will occur or is currently occurring.

It’s best to be careful when making correlational links between variables. Build your argument on strong evidence, and eliminate any confounding variables, or you may be on shaky ground.

Analogical reasoning means drawing conclusions about something based on its similarities to another thing. You first link two things together and then conclude that some attribute of one thing must also hold true for the other thing.

Analogical reasoning can be literal (closely similar) or figurative (abstract), but you’ll have a much stronger case when you use a literal comparison.

In deductive reasoning, you make inferences by going from general premises to specific conclusions. You start with a theory, and you might develop a hypothesis that you test empirically. You collect data from many observations and use a statistical test to come to a conclusion about your hypothesis.

Sometimes, both inductive and deductive approaches are combined within a single research study.

What is inductive reasoning?

How is inductive reasoning used in research?

In inductive research, you start by making observations or gathering data. Then, you take a broad scan of your data and search for patterns. Finally, you make general conclusions that you might incorporate into theories.

What’s the difference between inductive and deductive reasoning?

What are some types of inductive reasoning?

There are many different types of inductive reasoning that people use formally or informally.

Here are a few common types:

Exploratory research is a methodology approach that investigates research questions that have not previously been studied in-depth.
201