Published on September 11, 2022 by Jack Caulfield.

The AMA reference page appears at the end of your paper and lists full information about all the sources you cited. The heading “References” appears at the top, usually centered and bold.

The references are presented as a numbered list, appearing in the order in which they were first cited in the text. 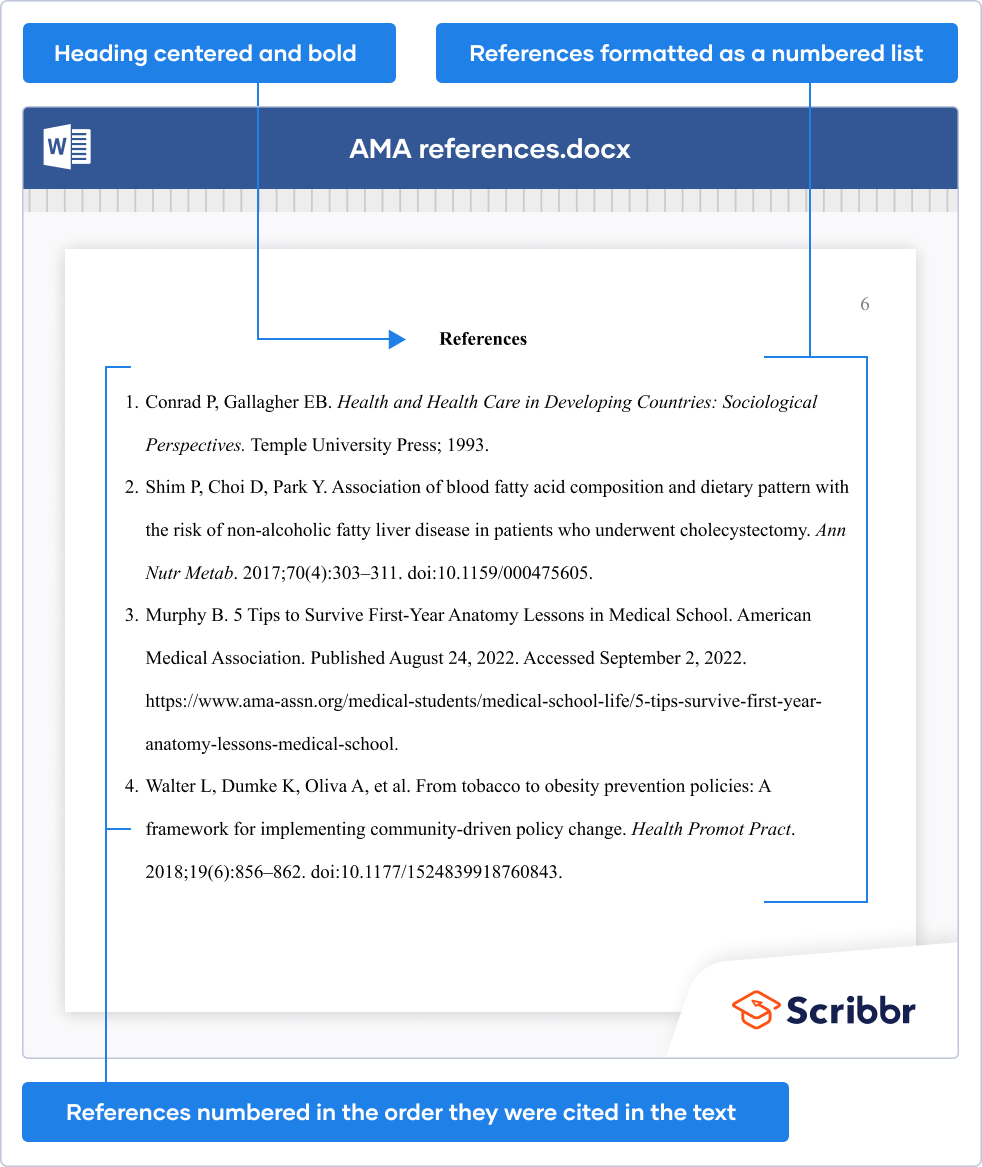 AMA presents rules for how to reference each type of source so that you can present the right information in a consistent way.

You’ll usually include the author’s name, the source title, information about the publisher or container, and the publication date. The specifics, and the exact formatting, vary by source type. Examples of the most commonly cited types are shown below.

Numbering and ordering the references

Sources on the reference page are numbered based on the order they were first cited in the text.

Sources that were cited more than once still only have one reference entry; you use the same number for them in each AMA in-text citation. Never create multiple references for the same source.

The specifics of AMA references (the exact information included and how to format it) vary by source type. But some general principles apply across source types:

How do I create AMA references?

An AMA reference usually includes the author’s last name and initials, the title of the source, information about the publisher or the publication it’s contained in, and the publication date. The specific details included, and the formatting, depend on the source type.

References in AMA style are presented in numerical order (numbered by the order in which they were first cited in the text) on your reference page. A source that’s cited repeatedly in the text still only appears once on the reference page.

How do I write author names in an AMA reference?

On your AMA reference page, author names are written with the last name first, followed by the initial(s) of their first name and middle name if mentioned.

There’s a space between the last name and the initials, but no space or punctuation between the initials themselves. The names of multiple authors are separated by commas, and the whole list ends in a period, e.g., “Andreessen F, Smith PW, Gonzalez E.”

When should I use “et al” in AMA citation format?

The names of up to six authors should be listed for each source on your AMA reference page, separated by commas. For a source with seven or more authors, you should list the first three followed by “et al”: “Isidore, Gilbert, Gunvor, et al.”

In the text, mentioning author names is optional (as they aren’t an official part of AMA in-text citations). If you do mention them, though, you should use the first author’s name followed by “et al” when there are three or more: “Isidore et al argue that …”

Note that according to AMA’s rather minimalistic punctuation guidelines, there’s no period after “et al” unless it appears at the end of a sentence. This is different from most other styles, where there is normally a period.

How do I cite the same source multiple times in AMA style?

In AMA citation format, if you cite the same source more than once in your paper, it still only has one entry on your AMA reference page, numbered based on the first time you cite it.

This means you’ll always use the same number for the AMA in-text citation for that source, not a different number each time. You can add different page numbers to the citations to talk about specific parts of the source in each case, e.g. 1(pp13–15)

An AMA in-text citation is a superscript number in the text that points the reader to the relevant reference on your numbered AMA reference page.
New

"Et al." is a Latin abbreviation meaning "and others." It's used in citations of sources with multiple authors.
432

What is a DOI? | Finding and Using Digital Object Identifiers

A DOI is a unique string of letters and numbers used to identify an article or ebook. It is more reliable and permanent than a URL.
66