A complete guide to MLA style 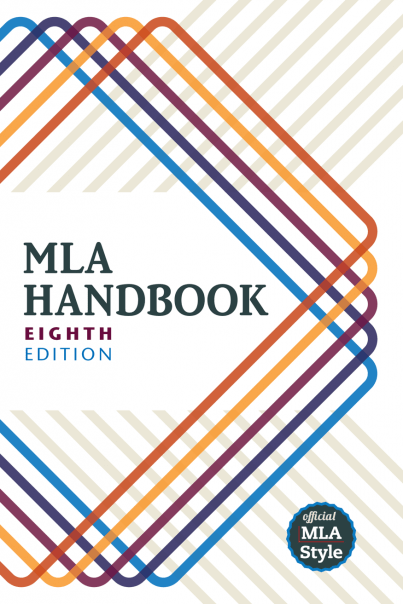 MLA style citations are commonly used by students and academics in the humanities. This guide follows the 8th (most recent) edition of the MLA Handbook, published by the Modern Language Association in 2016.

To cite sources in MLA style, you need:

Make sure your paper also adheres to MLA format: one-inch margins, double spacing, and indented paragraphs, with an MLA style heading on the first page.

You can create citations automatically with our free MLA Citation Generator. Enter a URL, DOI or ISBN and the generator will retrieve the necessary information.

The list of Works Cited is where you give full details of all sources you have cited in the text. Other citation styles sometimes call this the reference list or bibliography.

Author. "Title of the Source." Title of the Container, Other contributors, Version, Number,Publisher, Publication date, Location.

You only include information that is relevant to the type of source you’re citing. You can use the interactive tool to see examples for different source types.

Begin each source entry with the name of the author(s) or creator(s). The name of the first author is always inverted (last name, first name).

When a source has two authors, the second author’s name is shown in the normal order (first name, last name).

Sources with three or more authors are shortened. Only state the first author’s name followed by et al.

The author of a source is not necessarily a person; it can also be an organization. If so, simply use the name of the organization.

However, if the organization is both the author and publisher, start with the title of the source instead.

Always include the full title of the source, including subtitles (separated by a colon and space).

Use title case – capitalize all words apart from conjunctions, prepositions and articles. If there is no title, give a short description of the source, with normal sentence case capitalization.

The styling of the title depends on the type of source:

A container is the larger work that the source you’re citing appears in. For example, a chapter is part of a book, a page is part of a website, and an article is part of a journal.

If the source you’re citing is a self-contained whole (e.g. a whole book), leave out this element.

The container title is always italicized.

In most cases, only the title and location (often the URL or DOI) of the second container are included in the source entry. This is because databases like JSTOR don’t have relevant contributors, versions, publishers or publication dates.

Pay attention to the punctuation. The author and source title elements end with a period. Elements within a container are separated by commas, and a period is used to close the container.

Contributors are added right after the container title and always end with a comma. Use a description like “translated by”, “directed by” or “illustrated by” to indicate the role of the contributor. For example:

When a source has three or more contributors with the same role, include the name of the first contributor followed by “et al.”

If there are no other relevant contributors, leave out this element.

When there is more than one version of a source, you should include the version you used. For example, a second edition book, an expanded version of a collection or a director’s cut of a movie would require the version to be included:

Sources such as journal articles (vol. 18), magazines (no. 25) and TV shows (season 3, episode 5) are often numbered. If your source has numbered parts, include this in the source entry:

It is also possible for a source to have an edition, volume and number. Just separate them using commas.

Book and movie citations always include the publisher element. The publisher is the company responsible for producing and distributing the source – usually a book publisher (e.g. Macmillan or Oxford University Press) or a movie production company (e.g. Paramount Pictures or Warner Bros).

When not to add a publisher
Sometimes the publisher is already included elsewhere in the source entry, such as in the container title or author element. For example, the publisher of a website is often the same as the website name. In this case, omit the publisher element.

You generally don’t need to include a publisher for the following source types:

When available, always include the publication year. If you also know the month, day, or even time of publication, you can include this if relevant. Date ranges are also possible. For example:

No date
When a source does not state a publication date, add the date on which you accessed the information. For example: Accessed 22 Sep. 2018.

What you include in the location element depends on the type of source you are citing:

MLA in-text citations are brief references in the body of your document which direct your reader to the full reference in the list of Works Cited. You must include an in-text citation whenever you quote, paraphrase, or refer to information from a source.

A standard MLA in-text citation includes the author’s last name and a page number in parentheses. The page number refers to the exact location of the quote or information that you are citing:

If the author is already named in the sentence, you only need to include the page number in parentheses:

If a source does not state a specific author, the in-text citation should match the first word(s) of the Works Cited entry, whether that’s an organization name or the source title.

Format titles the same as they appear in the Works Cited, with italics or quotation marks. Use the full title if mentioned in the text itself, but an abbreviated title if included in parentheses.

If a source has no page numbers, but is divided into numbered sections (e.g. chapters or numbered paragraphs), use these instead:

For audiovisual sources (such as YouTube videos), use a timestamp:

If there is no numbering system in the original source, include only the author’s name in your citation.

Who uses the MLA citation style?

MLA Style is the second most used citation style (after APA). It is mainly used by students and researchers in humanities fields such as literature, languages, and philosophy.

What is the most recent edition of the MLA Handbook?

The MLA Handbook is currently in its 8th edition, published in 2016.

This quick guide to MLA style explains the latest guidelines for citing sources and formatting papers according to MLA.

What is the basic structure of an MLA citation?

A standard MLA Works Cited entry is structured as follows:

Only relevant information is included in the reference.

What is the easiest way to create MLA citations?

The fastest and most accurate way to create MLA citations is by using Scribbr’s MLA Citation Generator.

How do cite a source with no author, title, or date in MLA?

If information about your source is not available, you can either leave it out of the MLA citation or replace it with something else, depending on the type of information.

Apply MLA format to your title page, header, and works cited page in minutes with our 3-minute video, template and examples.
238

MLA block quotes are indented 0.5 inches and double spaced, with no quotation marks. Cite the author and page in parentheses after the period.
119

The most common citation styles are MLA, APA, and Chicago, but there are many others. Follow our examples to cite correctly in every style.
213