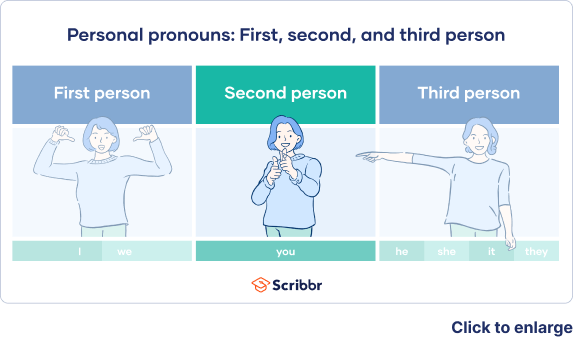 Second-person pronouns are words like “you” that refer to the person or people being spoken or written to. Like first- and third-person pronouns, they are a type of personal pronoun.

The second person is used frequently in everyday speech and even in some formal speech and writing, but it should be avoided in academic writing.

Second-person pronouns vary less in form than other kinds of personal pronouns. You can see all the forms in the table below, with more detailed explanation in the following sections.

The second-person subject and object pronoun (“you”)

Unlike the first and third person, the second person makes no distinction between subject and object pronouns, using the same form, you, for both. This form is also used in both the singular and the plural, which can sometimes cause ambiguity.

The second-person possessive pronoun (“yours”)

The second-person possessive pronoun yours stands for something that belongs to whomever you’re speaking to. Like “you,” it’s the same in the singular and the plural.

It’s closely related to the second-person possessive determiner your. The difference is that determiners must modify a noun (e.g., “your house”), while pronouns stand alone, replacing the noun (e.g., “I think this is yours”).

Second-person reflexive pronouns (“yourself” and “yourselves”)

The second-person reflexive pronouns are the only ones that differ depending on number: the singular form is yourself, the plural yourselves. Reflexive pronouns are used with reflexive verbs and in other contexts where the subject and object of a sentence are both in the second person (e.g., “you should wash yourself”).

The same words are also used as intensive pronouns, which are used to place greater emphasis on the person who carries out the action (e.g., “you’ll have to do it yourself”).

You might be tempted to do so when making a generalization or pointing the reader to a piece of information. To avoid it, rephrase or use the impersonal pronoun “one.”

When you’re directly addressing someone or some group of people, even if it’s in quite a formal context (e.g., a cover letter or an email message to your dissertation supervisor), it’s perfectly fine to use second-person pronouns.

There are some other second-person pronouns that are not part of standard modern English—and thus should not be used in any formal context—but which you may encounter in everyday speech, in various dialects, or in older writing.

There used to be a clearer distinction between singular and plural, as well as between formal and informal, in English second-person pronouns.

In Early Modern English, an alternative set of pronouns beginning with “th” instead of “y” was used for the singular. The “y” pronouns we use today were only used for the plural and for formal speech or writing (whether singular or plural), and “ye” was sometimes used as an alternate subject pronoun.

“Y’all” and other plural forms

In modern English, plural forms of the second-person pronouns are sometimes used in everyday speech—not in any formal context. Different alternatives are used depending on the region. Examples are shown in the table below.

Yes, you is a personal pronoun. Specifically, it’s a second-person pronoun that can be either singular or plural and is used as both the subject and object pronoun. It’s used to address someone directly in speech or writing.

Is “you” singular or plural?

However, the second-person reflexive pronoun does have two forms, the singular yourself and the plural yourselves.

Nonstandard forms such as “y’all” are sometimes used to express the plural in different dialects of English, but they should not be used in a formal context.

Personal pronouns are words like “I,” “she,” and “it” that are used to refer to people and things without explicitly naming them.
6