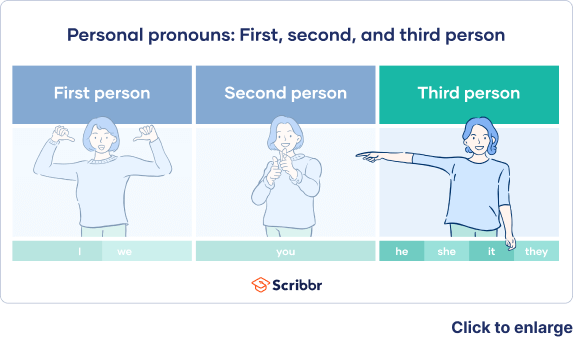 Third-person pronouns are words such as “she,” “it,” and “they” that are used to refer to other people and things that are not being directly addressed, without naming them specifically with a noun. Like first- and second-person pronouns, they are a type of personal pronoun.

There are quite a lot of third-person pronouns, since they differ based on the gender (or lack thereof) and number of who or what is being referred to. They also change based on whether they are used based on case: subject, object, possessive, or reflexive/intensive. The table below shows all the third-person pronouns.

These words are used to refer to individual men and boys—and sometimes to male animals.

These words are used to refer to individual women and girls—and sometimes to female animals.

These words refer to something other than a person: a concept, object, place, or animal (although gendered pronouns are sometimes used instead for animals). It’s considered very rude to refer to a person as “it”; to refer to someone without specifying gender, use the singular “they” instead.

These words are used to refer to more than one of anything: people, things, concepts, places, animals, and so on. No distinction is made between people and things or between male and female in this case; the plural pronouns are always the same.

The third-person plural pronouns and possessive determiner—they, them, theirs, themselves, and their—are now commonly used as gender-neutral singular pronouns (also called epicene pronouns) to refer to people. This usage is often called the singular “they.”

The singular “they” has existed for a long time, but it was typically viewed as an error in the past. However, most style guides now endorse it, recognizing the need for a way to refer to individuals in a gender-neutral way.

These words are used (instead of “he or she”) when referring to a generic individual whose gender is unspecified or to an individual who identifies as neither male nor female.

Can I write about myself in the third person?

In most contexts, you should use first-person pronouns (e.g., “I,” “me”) to refer to yourself. In some academic writing, the use of the first person is discouraged, and writers are advised to instead refer to themselves in the third person (e.g., as “the researcher”).

This convention is mainly restricted to the sciences, where it’s used to maintain an objective, impersonal tone. But many style guides (such as APA Style) now advise you to simply use the first person, arguing that this style of writing is misleading and unnatural.

Second-person pronouns like “you” refer to the person or people being spoken or written to. They should be avoided in academic writing.