Comparing and Contrasting in an Essay | Tips & Examples

Comparing and contrasting is an important skill in academic writing. It involves taking two or more subjects and analyzing the differences and similarities between them.

You might find yourself comparing all kinds of things in an academic essay: historical figures, literary works, policies, research methods, etc. Doing so is an important part of constructing arguments.

When should I compare and contrast?

Many assignments will invite you to make comparisons quite explicitly, as in these prompts.

Some other prompts may not directly ask you to compare and contrast, but present you with a topic where comparing and contrasting could be a good approach.

One way to approach this essay might be to contrast the situation before the Great Depression with the situation during it, to highlight how large a difference it made.

As the name suggests, comparing and contrasting is about identifying both similarities and differences. You might focus on contrasting quite different subjects or comparing subjects with a lot in common—but there must be some grounds for comparison in the first place.

For example, you might contrast French society before and after the French Revolution; you’d likely find many differences, but there would be a valid basis for comparison. However, if you contrasted pre-revolutionary France with Han-dynasty China, your reader might wonder why you chose to compare these two societies.

This is why it’s important to clarify the point of your comparisons by writing a focused thesis statement. Every element of an essay should serve your central argument in some way. Consider what you’re trying to accomplish with any comparisons you make, and be sure to make this clear to the reader.

Comparing and contrasting as a brainstorming tool

Comparing and contrasting can be a useful tool to help organize your thoughts before you begin writing any type of academic text. You might use it to compare different theories and approaches you’ve encountered in your preliminary research, for example.

Let’s say your research involves the competing psychological approaches of behaviorism and cognitive psychology. You might make a table to summarize the key differences between them.

Or say you’re writing about the major global conflicts of the twentieth century. You might visualize the key similarities and differences in a Venn diagram. 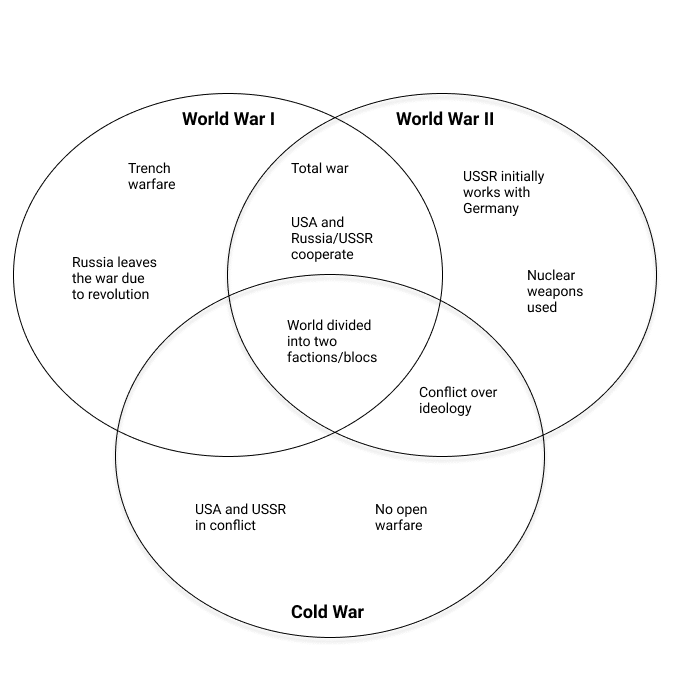 These visualizations wouldn’t make it into your actual writing, so they don’t have to be very formal in terms of phrasing or presentation. The point of comparing and contrasting at this stage is to help you organize and shape your ideas to aid you in structuring your arguments.

When comparing and contrasting in an essay, there are two main ways to structure your comparisons: the alternating method and the block method.

In the alternating method, you structure your text according to what aspect you’re comparing. You cover both your subjects side by side in terms of a specific point of comparison. Your text is structured like this:

Mouse over the example paragraph below to see how this approach works.

In the block method, you cover each of the overall subjects you’re comparing in a block. You say everything you have to say about your first subject, then discuss your second subject, making comparisons and contrasts back to the things you’ve already said about the first. Your text is structured like this:

Mouse over the example paragraph below to see how this approach works.

Note that these two methods can be combined; these two example paragraphs could both be part of the same essay, but it’s wise to use an essay outline to plan out which approach you’re taking in each paragraph.

When do I need to compare and contrast?

Some essay prompts include the keywords “compare” and/or “contrast.” In these cases, an essay structured around comparing and contrasting is the appropriate response.

Comparing and contrasting is also a useful approach in all kinds of academic writing: You might compare different studies in a literature review, weigh up different arguments in an argumentative essay, or consider different theoretical approaches in a theoretical framework.

How do I choose subjects to compare and contrast?

Your subjects might be very different or quite similar, but it’s important that there be meaningful grounds for comparison. You can probably describe many differences between a cat and a bicycle, but there isn’t really any connection between them to justify the comparison.

You’ll have to write a thesis statement explaining the central point you want to make in your essay, so be sure to know in advance what connects your subjects and makes them worth comparing.

How do I compare and contrast in a structured way?

Comparisons in essays are generally structured in one of two ways:

It’s also possible to combine both methods, for example by writing a full paragraph on each of your topics and then a final paragraph contrasting the two according to a specific metric.

How to write an expository essay

An expository essay provides an explanation of a topic. It’s usually a short essay designed to give clear, reliable information on its topic.
1723

How to write an argumentative essay | Examples & tips

An argumentative essay presents a complete argument backed up by evidence and analysis. It is the most common essay type at university.
1830

Each paragraph in your paper should focus on one central point. Follow these 6 steps for a strong paragraph structure.
1222