How to Cite an Image in APA Style | Format & Examples

An APA image citation includes the creator’s name, the year, the image title and format (e.g. painting, photograph, map), and the location where you accessed or viewed the image.

When you include an image or photo in your text, as well as citing the source, you must also present it as a figure and include any copyright/permissions information.

You can create your citations automatically with Scribbr’s free APA citation generator.

For online images, include the name of the site you found it on, and a URL. Link directly to the image where possible, as it may be hard to locate from the other information given.

It can often be hard to find accurate information about images accessed online. Try looking for alternate sources of an image, checking image sites like Flickr that provide reliable information on their images, or finding a different image in cases where the one you planned to use has no reliable information.

However, if you do need to cite an image with no author, date or title listed, there are ways around this.

For untitled images, include a description of the image, in square brackets, where the title would usually go. If there is no publication date, add “n.d.” in place of the date, and add the date that you accessed the image.

For images where the creator is unknown, you can use the title or description in the author position.

If you viewed an image in person rather than online—for example in a museum or gallery, or in another text—the source information is different.

For images viewed in a museum or gallery, you include the name and location of the institution where you viewed the image.

Citations for images sourced from a print publication such as a book, journal, or magazine include information about the print source in which the image originally appeared:

The AI-powered Citation Checker helps you avoid common mistakes such as:

Including images as figures

When you include the image itself in your paper, it should be properly formatted as an APA figure, with a number, a descriptive title, and an entry in your list of figures if you have one.

The title of a figure should appear immediately above the image itself, and will vary according to the type of image cited. For example, an artwork is simply the work’s title.

A note below the figure may include further details regarding its authorship and medium, copyright/permissions information, additional explanatory notes, or other elements. 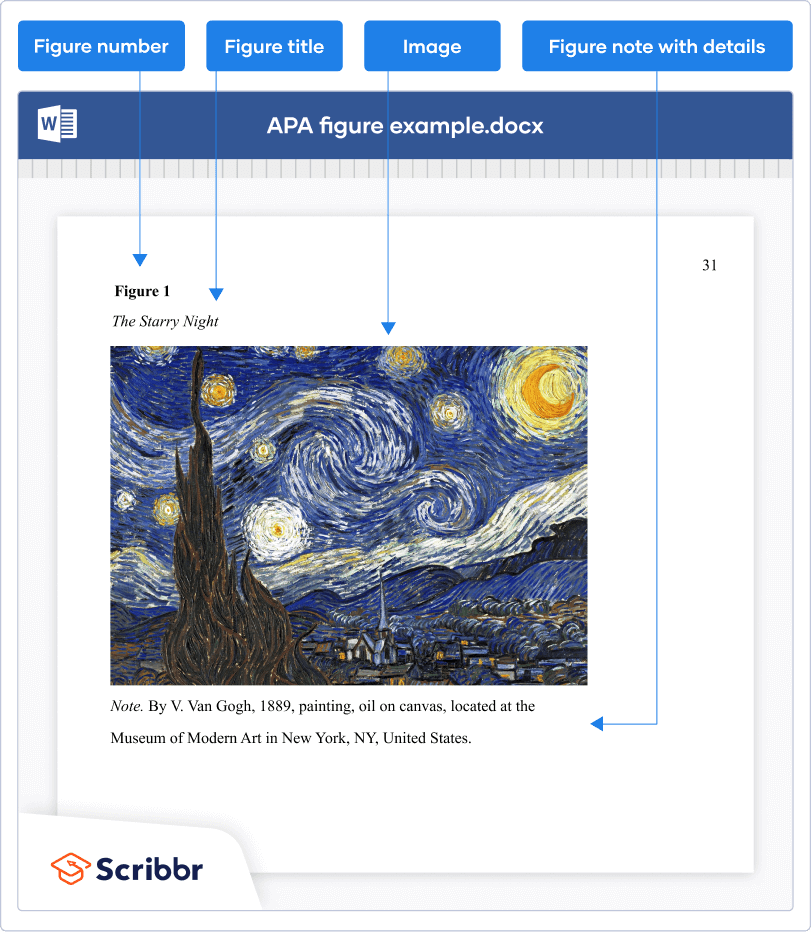 How do I cite an image on my title page?

In most styles, the title page is used purely to provide information and doesn’t include any images. Ask your supervisor if you are allowed to include an image on the title page before doing so. If you do decide to include one, make sure to check whether you need permission from the creator of the image.

Include a note directly beneath the image acknowledging where it comes from, beginning with the word “Note.” (italicized and followed by a period). Include a citation and copyright attribution. Don’t title, number, or label the image as a figure, since it doesn’t appear in your main text.

Should I include tables and figures in my APA reference list?

If you adapt or reproduce a table or figure from another source, you should include that source in your APA reference list. You should also include copyright information in the note for the table or figure, and include an APA in-text citation when you refer to it.

Tables and figures you created yourself, based on your own data, are not included in the reference list.

Should I include lists of my tables and figures in an APA paper?

APA doesn’t require you to include a list of tables or a list of figures. However, it is advisable to do so if your text is long enough to feature a table of contents and it includes a lot of tables and/or figures.

A list of tables and list of figures appear (in that order) after your table of contents, and are presented in a similar way.

Want to be sure you are not committing plagiarism?

Have peace of mind and start our plagiarism check now.
Start the check
Reliable & fast

What do you put in the figure note? It doesn't say.

What you include in the note for a figure varies depending on what the figure is. If it's an image you took from another source, you would include information about that source, and potentially copyright and permissions information if needed. If it's some sort of data visualization (like a graph), you might include definitions that help explain how the reader should understand the image.