How to Create an APA Style Appendix | Format & Examples

An appendix is a section at the end of an academic text where you include extra information that doesn’t fit into the main text. The plural of appendix is “appendices.”

In an APA Style paper, appendices are placed at the very end, after the reference list. 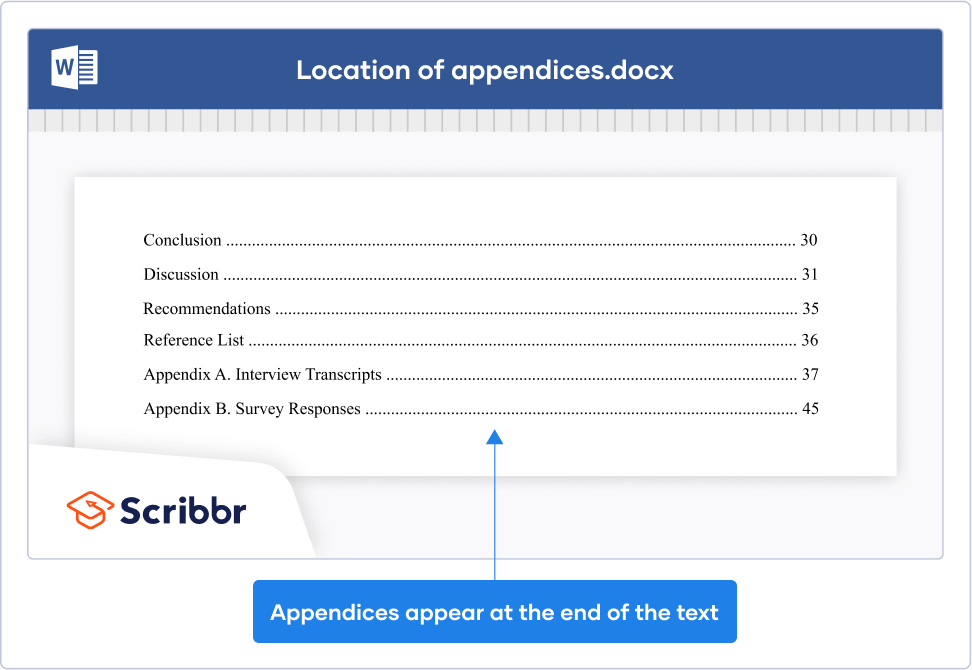 Do I need an appendix?

You don’t always need to include any appendices. An appendix should present information that supplements the reader’s understanding of your research but is not essential to the argument of your paper. Essential information is included in the main text.

For example, you might include some of the following in an appendix:

You should refer to each appendix at least once in the main text. If you don’t refer to any information from an appendix, it should not be included.

When you discuss information that can be found in an appendix, state this the first time you refer to it:

Note that, if you refer to the same interviews again, it’s not necessary to mention the appendix each time.

The text is presented in general APA format: left-aligned, double-spaced, and with page numbers in the top right corner. Start a new page for each new appendix.

The example image below shows how to format an APA Style appendix. Are your APA in-text citations flawless?

The AI-powered APA Citation Checker points out every error, tells you exactly what’s wrong, and explains how to fix it. Say goodbye to losing marks on your assignment!

Organizing and labeling your appendices

If you include just one appendix, it is simply called “Appendix” and referred to as such in-text:

When more than one appendix is included, they are labeled “Appendix A,” “Appendix B,” and so on.

Present and label your appendices in the order they are referred to in the main text.

Labeling tables and figures in appendices

An appendix may include (or consist entirely of) tables and/or figures. Present these according to the same formatting rules as in the main text.

For example, in Appendix A, your tables are Table A1, Table A2, etc; your figures are Figure A1, Figure A2, etc.

The numbering restarts with each appendix: For example, the first table in Appendix B is Table B1; the first figure in Appendix C is Figure C1; and so on. If you only have one appendix, use A1, A2, etc.

What is an appendix?

An appendix contains information that supplements the reader’s understanding of your research but is not essential to it. For example:

Something is only worth including as an appendix if you refer to information from it at some point in the text (e.g. quoting from an interview transcript). If you don’t, it should probably be removed.

Where do appendices go in an APA Style paper?

Appendices in an APA Style paper appear right at the end, after the reference list and after your tables and figures if you’ve also included these at the end.

Do I need to number my appendices in APA Style?

When you include more than one appendix in an APA Style paper, they should be labeled “Appendix A,” “Appendix B,” and so on.

When you only include a single appendix, it is simply called “Appendix” and referred to as such in the main text.

Can I cite sources in an appendix?

Yes, if relevant you can and should include APA in-text citations in your appendices. Use author-date citations as you do in the main text.

A table of contents isn't required in APA Style, but if you want to include one, you can create it automatically in Word.
647

How to format tables and figures in APA Style

APA tables and figures are preceded by a number and title, and followed by explanatory notes (if necessary).
301

Learn how to set up APA format for your paper. From the title page and headings to references and citations.
1037