Have an APA expert improve your writing, formatting and citations

A table concisely presents information (often numbers) in rows and columns. A figure is any other image or illustration you include in your text—anything from a bar chart to a photograph.

Tables and figures differ in terms of how they convey information, but APA Style presents them in a similar format—preceded by a number and title, and followed by explanatory notes (if necessary).

Tables will vary in size and structure depending on the data you’re presenting, but APA gives some general guidelines for their design. To correctly format an APA table, follow these rules:

An example of a table formatted according to APA guidelines is shown below. 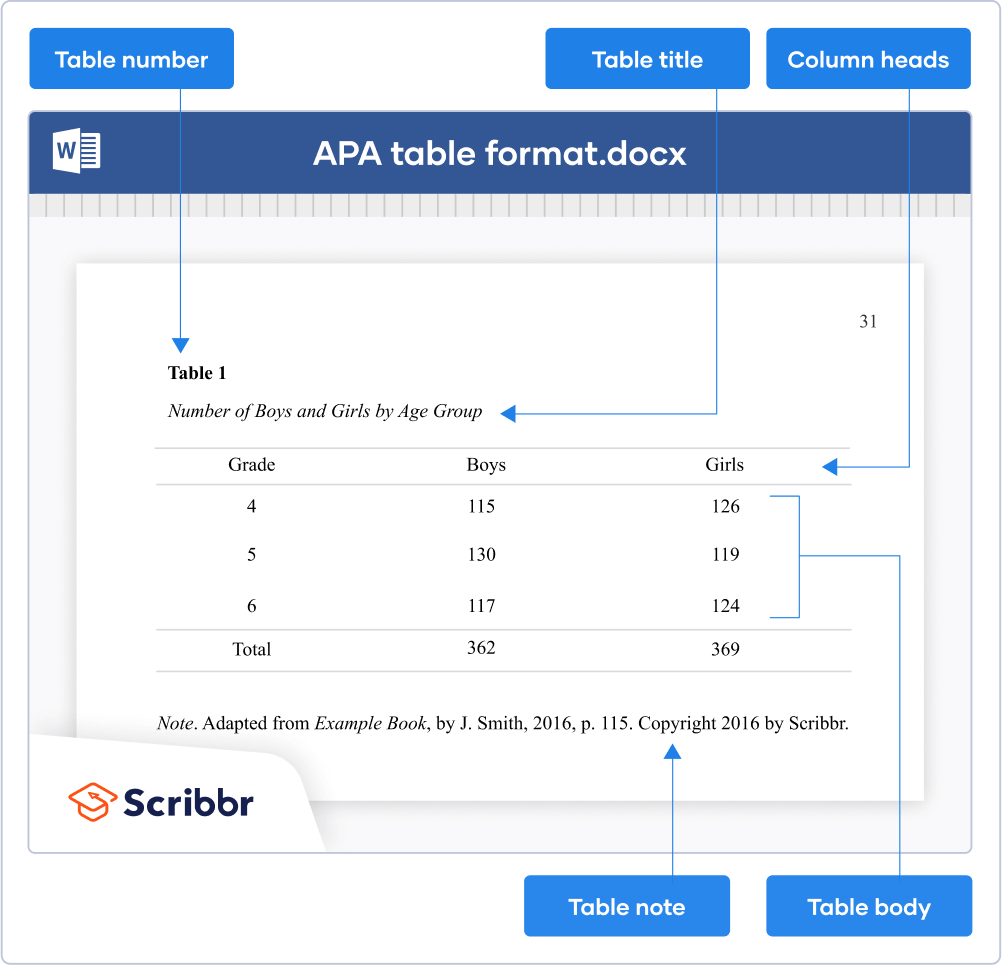 The table above uses only four lines: Those at the top and bottom, and those separating the main data from the column heads and the totals.

Create your tables using the tools built into your word processor. In Word, you can use the “Insert table” tool.

Any images used within your text are called figures. Figures include data visualization graphics—e.g. graphs, diagrams, flowcharts—as well as things like photographs and artworks.

To correctly format an APA figure, follow these rules:

An example of a figure formatted according to APA guidelines is shown below. 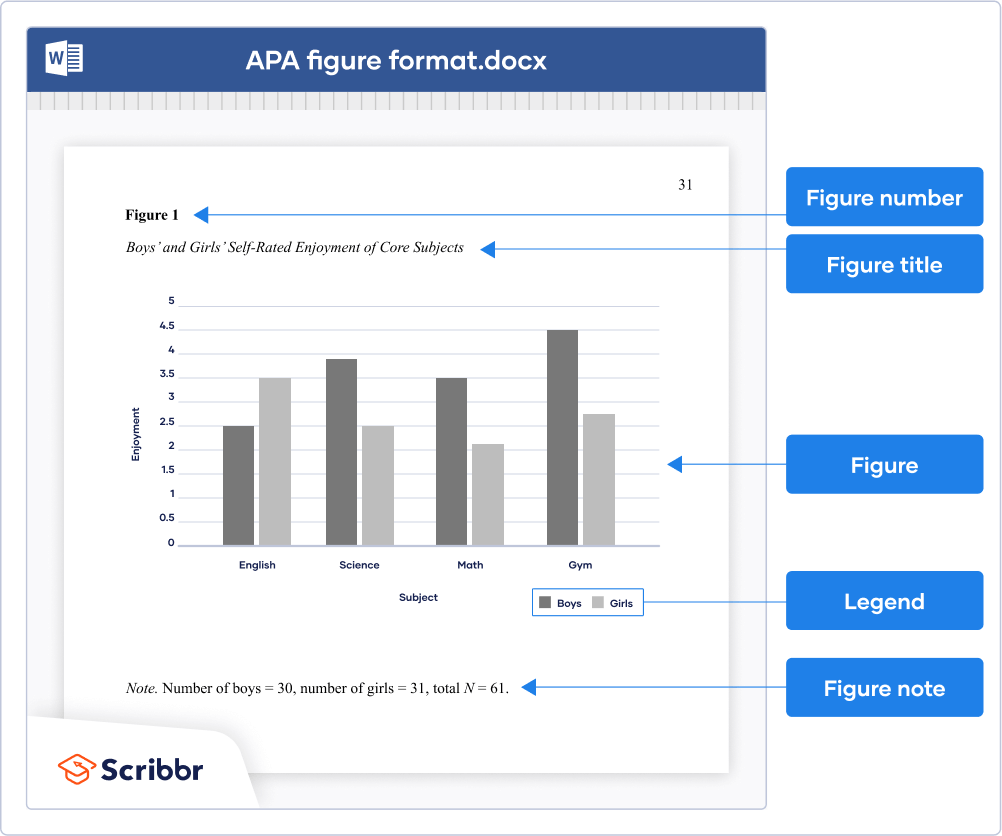 Keep the design of figures as simple as possible. Use colors only where necessary, not just to make the image look more appealing.

For text within the image itself, APA recommends using a sans serif font (e.g. Arial) with a size between 8 and 14 points.

For other figures, such as photographs, you won’t need a legend; the figure consists simply of the image itself, reproduced at an appropriate size and resolution.

Are your APA in-text citations flawless?

The AI-powered APA Citation Checker points out every error, tells you exactly what’s wrong, and explains how to fix it. Say goodbye to losing marks on your assignment!

Numbering and titling tables and figures

Each table or figure is preceded by a number and title.

Tables and figures are each numbered separately, in the order they are referred to in your text. For example, the first table you refer to is Table 1; the fourth figure you refer to is Figure 4.

The title should clearly and straightforwardly describe the content of the table or figure. Omit articles to keep it concise.

The table or figure number appears on its own line, in bold, followed by the title on the following line, in italics and title case.

Where a table or figure needs further explanation, notes should be included immediately after it. These are not your analysis of the data presented; save that for the main text.

There are three kinds of notes: general, specific, and probability. Each type of note appears in a new paragraph, but multiple notes of the same kind all appear in one paragraph.

Only include the notes that are needed to understand the table or figure. It may be that it is clear in itself, and has no notes, or only probability notes; be as concise as possible.

General notes come first. They are preceded by the word “Note” in italics, followed by a period. They include any explanations that apply to the table or figure as a whole and a citation if it was adapted from another source, and they end with definitions of any abbreviations used.

Where to place tables and figures

You have two options for the placement of tables and figures in APA Style:

If you place them throughout the text, note that each table or figure should only appear once. If you refer to the same table or figure more than once, don’t reproduce it each time—just place it after the paragraph in which it’s first discussed.

Align the table or figure with the text along the left margin. Leave a line break before and after the table or figure to clearly distinguish it from the main text, and place it on a new page if necessary to avoid splitting it across multiple pages. 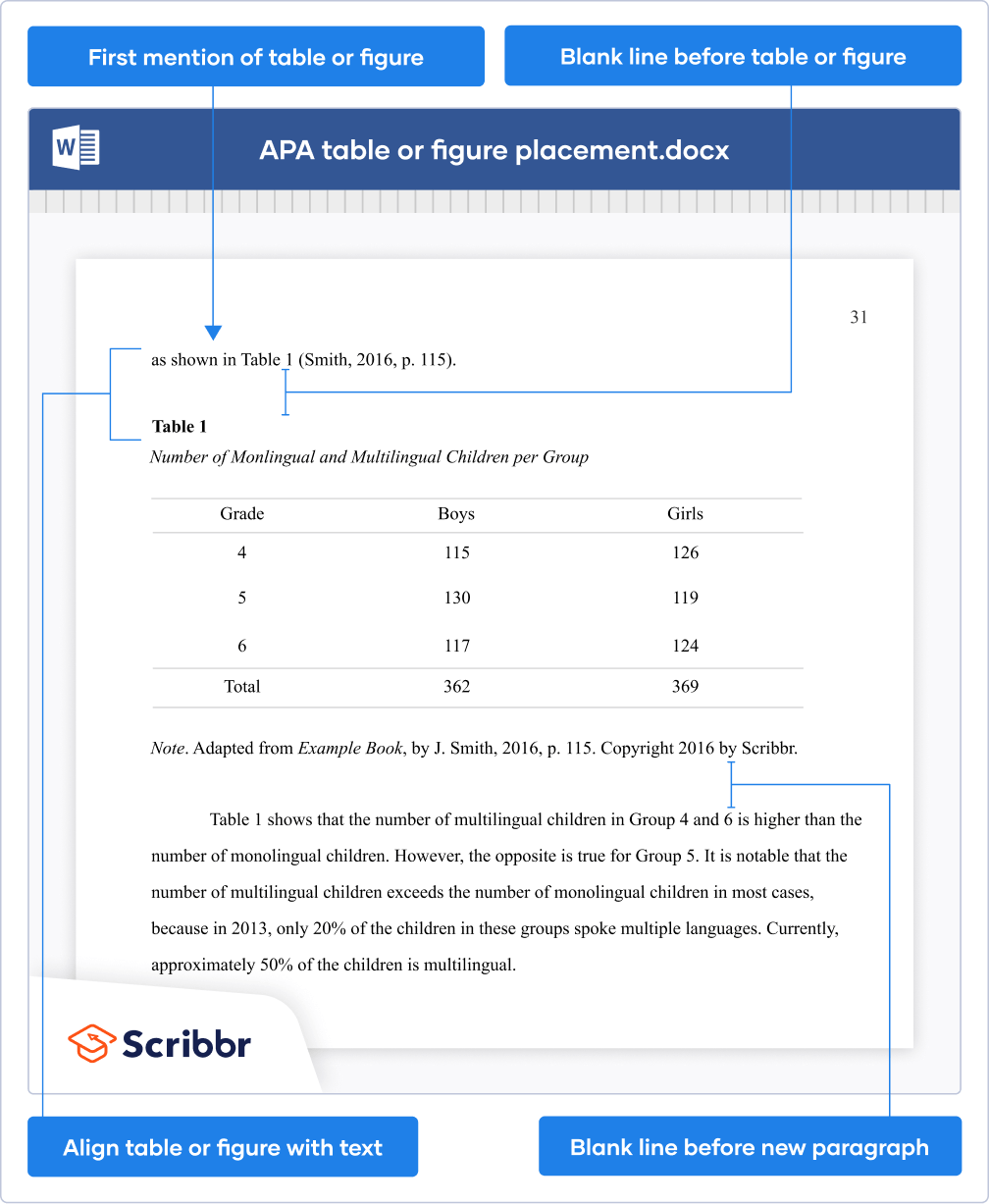 Referring to tables and figures in the text

Avoid making redundant statements about your tables and figures in your text. When you write about data from tables and figures, it should be to highlight or analyze a particular data point or trend, not simply to restate what is already clearly shown in the table or figure:

Additionally, even if you have embedded your tables and figures in your text, refer to them by their numbers, not by their position relative to the text or by description:

When should I use a table or figure to present data?

In an APA Style paper, use a table or figure when it’s a clearer way to present important data than describing it in your main text. This is often the case when you need to communicate a large amount of information.

Before including a table or figure in your text, always reflect on whether it’s useful to your readers’ understanding:

If the data you need to present only contains a few relevant numbers, try summarizing it in the text (potentially including full data in an appendix). If describing the data makes your text overly long and difficult to read, a table or figure may be the best option.

Should I include lists of my tables and figures?

APA doesn’t require you to include a list of tables or a list of figures. However, it is advisable to do so if your text is long enough to feature a table of contents and it includes a lot of tables and/or figures.

A list of tables and list of figures appear (in that order) after your table of contents, and are presented in a similar way.

Should I include tables and figures in the reference list?

If you adapt or reproduce a table or figure from another source, you should include that source in your APA reference list. You should also acknowledge the original source in the note or caption for the table or figure.

Tables and figures you created yourself, based on your own data, are not included in the reference list.

How do I cite an image on my title page?

In most styles, the title page is used purely to provide information and doesn’t include any images. Ask your supervisor if you are allowed to include an image on the title page before doing so. If you do decide to include one, make sure to check whether you need permission from the creator of the image.

Include a note directly beneath the image acknowledging where it comes from, beginning with the word “Note.” (italicized and followed by a period). Include a citation and copyright attribution. Don’t title, number, or label the image as a figure, since it doesn’t appear in your main text.

Citing tables and figures from other sources in APA Style

You must indicate the sources of any tables or figures that aren't your own creation with citations and copyright notes.
98

How to cite an image in APA Style

An APA image citation includes the creator’s name, the year, the image title and format, and the location where you viewed the image.
98

How to write an APA results section

In an APA style results section, you summarize your data and report the findings of all relevant statistical analyses.
161