To cite a movie in APA Style, list the film’s producer(s) and director as authors and the production studio as publisher. The title is written in sentence case and italicized, followed by the label “Motion picture” in square brackets.

The APA 6 in-text citation includes the last names of the producer(s) and the year. If you are referring to a specific quote or scene from the movie, add a timestamp to direct the reader to the relevant part.

In general, you don’t need to specify the format in which you watched the film. However, if you are discussing a specific version of the film (for example, if you refer to the special features of a DVD), you can specify the version in the citation.

In these cases, the publication date is the release year of the specific version, not the general release:

As in the above example, when the director is also a producer, this information should be included.

Movies on Netflix and other streaming services

You don’t usually need to state that a film was viewed on a particular streaming service (like Netflix or Hulu). Just follow the standard format without mentioning where you viewed the film.

However, if the film was also produced by a streaming company (e.g. a Netflix Original), you should replace the studio information with a URL linking to their site:

Where to find source information for a movie citation

The source information you need for your citation can usually be found in the movie’s end credits or on the packaging for a physical release. Otherwise, you can find it on IMDb. 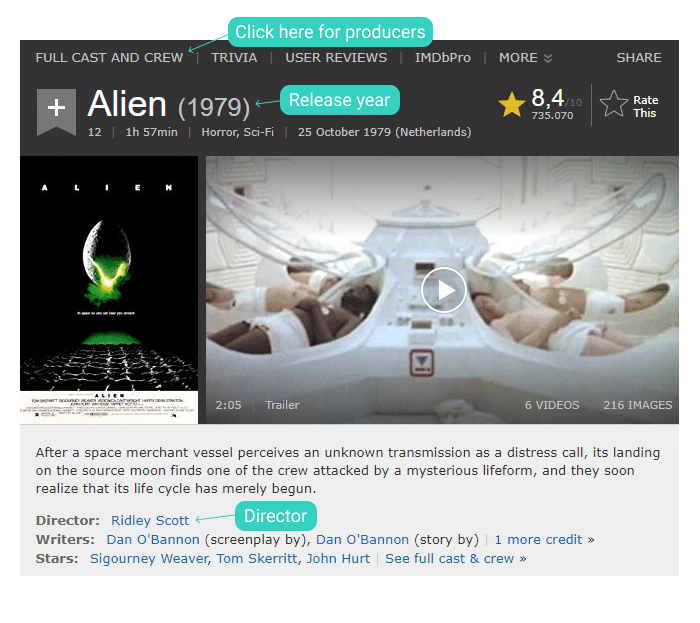 Studio information can be found further down this page, under the heading “Company Credits.” Click on “Full Cast and Crew” and scroll down to “Produced by” for producer information: