APA vs MLA | The Key Differences in Format & Citation 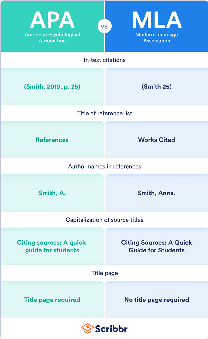 APA and MLA are two of the most commonly used citation styles.

APA Style Is defined in the Publication Manual of the American Psychological Association, currently in its 7th edition.

The rules of MLA style are found in the MLA Handbook, currently in its 9th edition (published by the Modern Language Association).

In both styles, a source citation consists of:

However, citations look slightly different in each style, with different rules for things like title capitalization, author names, and placement of the date.

There are also some differences in layout and formatting. Download the Word templates for a correctly formatted paper in either style.

Which style should I use?

You’ll usually be told which citation style you should use in your writing by your department or supervisor. If you’re not sure, look up your institution’s guidelines or ask directly.

Occasionally, you may be allowed to choose a style yourself. If so, it’s best to base your decision on your area of study:

In-text citations in APA and MLA

Both MLA and APA use parenthetical citations to cite sources in the text. However, they include slightly different information.

An APA in-text citation includes the author’s last name and the publication year. If you’re quoting or paraphrasing a specific passage, you also add a page number.

When there are two authors, APA Style separates their names with an ampersand (&), while MLA uses “and.” For three or more authors, both styles list the first author followed by “et al.”

In both APA and MLA style, you list full details of all cited sources on a separate page at the end of your paper. In APA this is usually called the reference list; in MLA it’s called the Works Cited.

The formatting of source entries is different in each style. Some key differences are summarized in the table below.

Using the interactive tool, you can switch between APA and MLA style citations for common source types to explore the differences for yourself.

You can automatically create your in-text citations and references in either style using the free Scribbr Citation Generators.

The general formatting guidelines for APA and MLA are similar. Both styles recommend:

In APA, a separate cover page is required. It lists the title of your paper, your full name, your institution and department, the course the paper is for, your instructor’s name, and the due date, all centered and double-spaced. 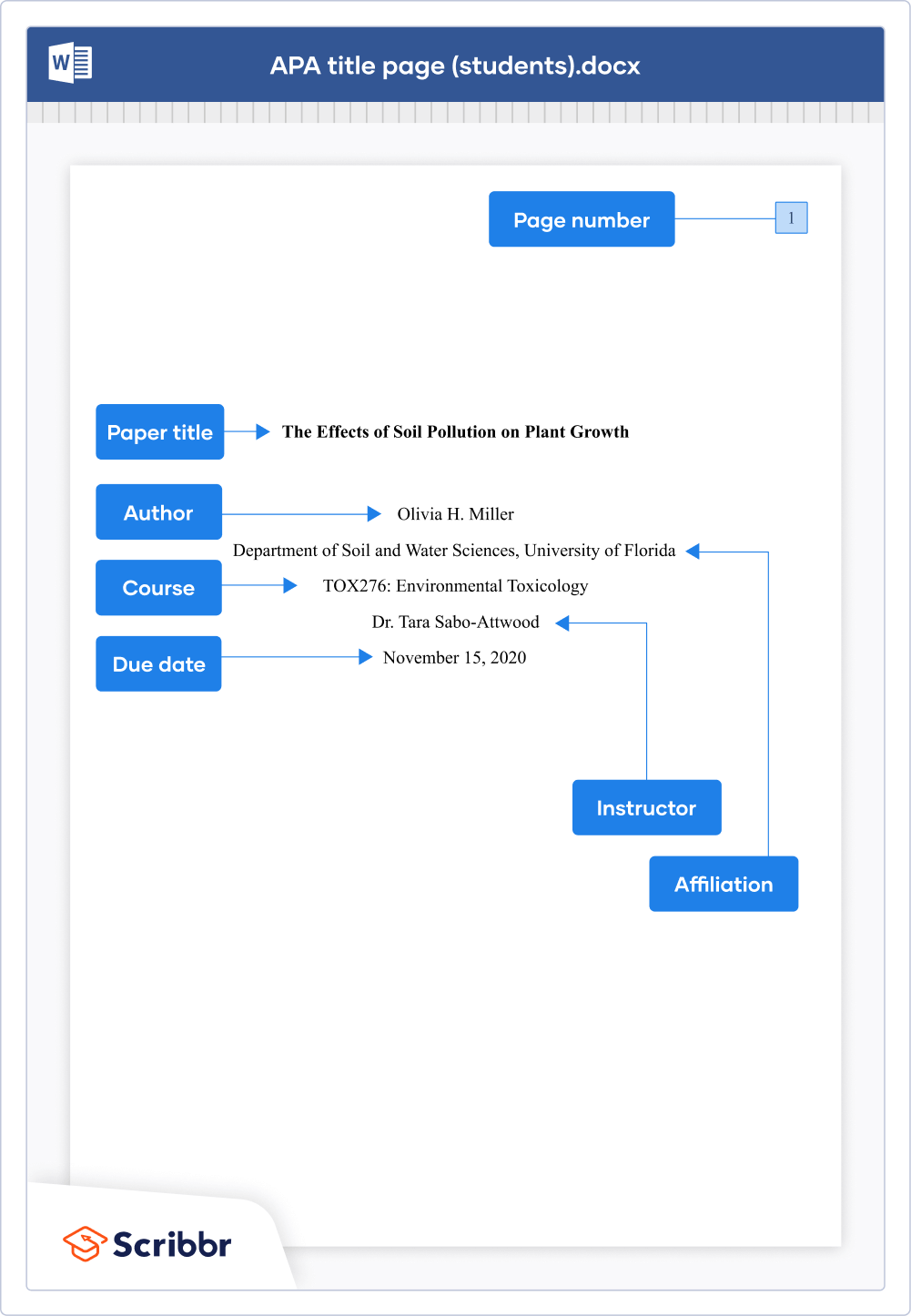 In MLA, no title page is required (though your instructor may require you to include one). Instead of a title page, you add a four-line header on the first page.

The header is left-aligned and double-spaced and lists your full name, your instructor’s name, the course title or number, and the submission date. The paper’s title is centered on a new line under the header. 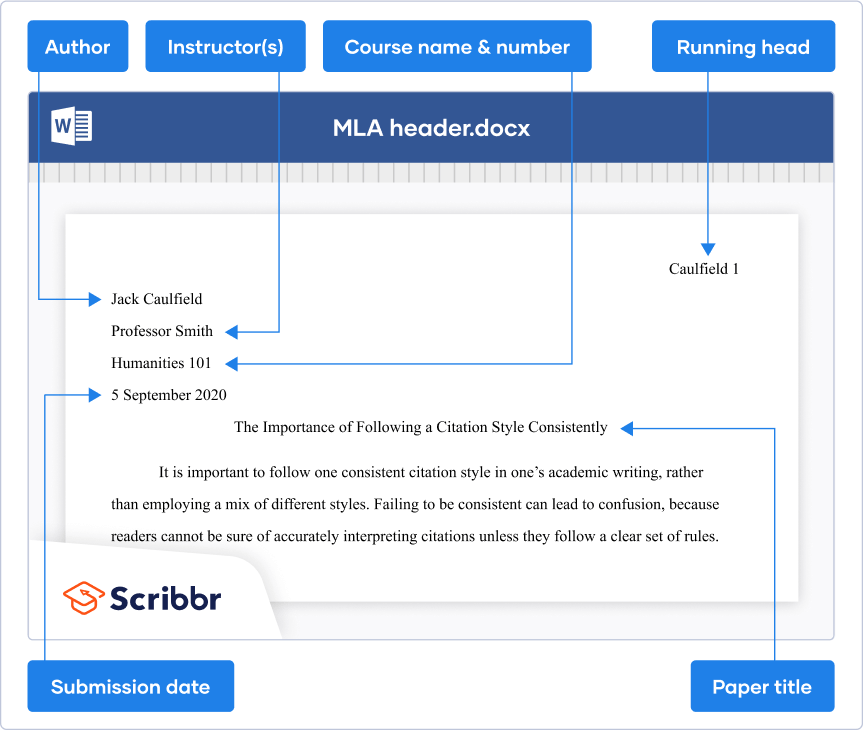 In APA Style, include a right-aligned page number at the top of each page.

In manuscripts that will be submitted for publication, you should also include an APA running head with a shortened version of your paper’s title (up to 50 characters long), all in capitals and left-aligned.

The running head is not required in student papers (unless you’re instructed otherwise). 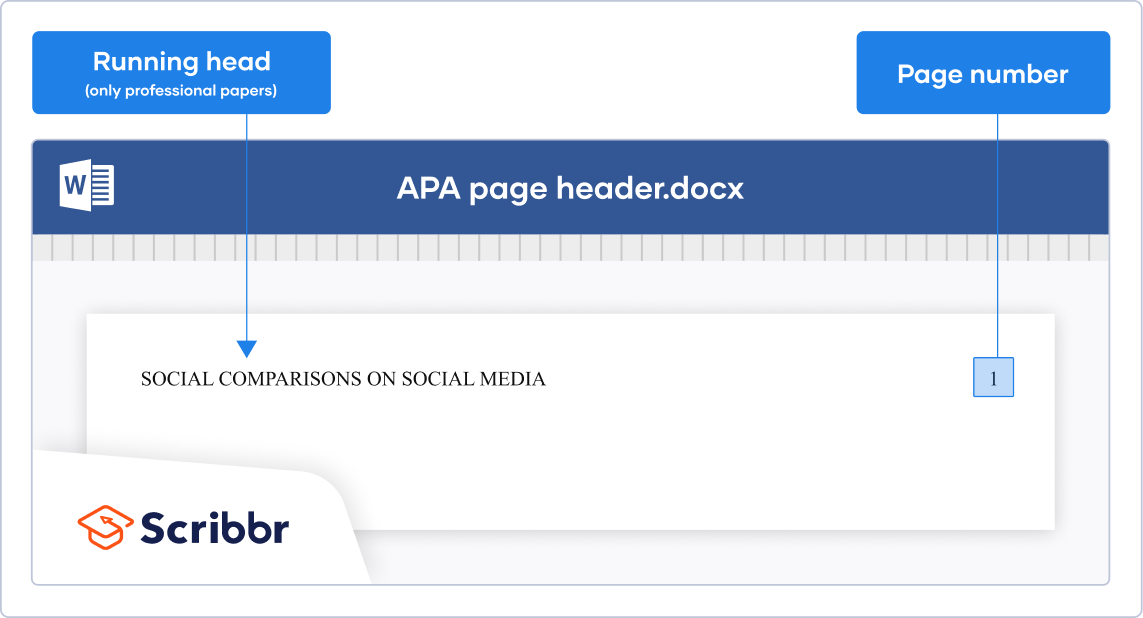 In MLA, your last name and the page number appear as a running head at the top of every page, both right-aligned. 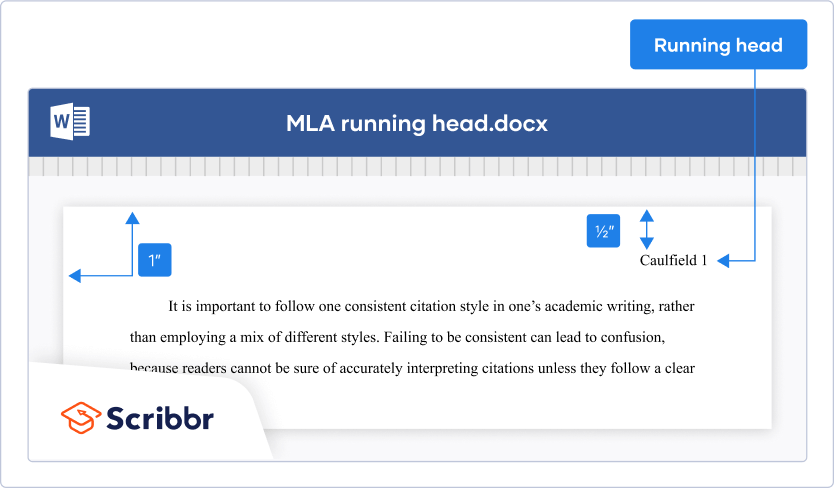 Block quotes are long quotations that are set on a new line and indented as a block, without quotation marks.

In APA, any quote of 40 words or longer should be formatted as a block quote. In MLA, block quote formatting is used for quotes of more than four lines of prose or more than three lines of verse.

In both styles, the in-text citation is added after the period at the end of a block quote.

The reader quickly becomes familiar with Nick Carraway’s relationship with Jay Gatsby, as the very first mention of the character illustrates both his admiration and disdain:

Only Gatsby, the man who gives his name to this book, was exempt from my reaction—Gatsby who represented everything for which I have an unaffected scorn. If personality is an unbroken series of successful gestures, then there was something gorgeous about him, some heightened sensitivity to the promises of life, as if he were related to one of those intricate machines that register earthquakes ten thousand miles away. (Fitzgerald, 1925, p. 4)

The reader quickly becomes familiar with Nick Carraway’s relationship with Jay Gatsby, as the very first mention of the character illustrates both his admiration and disdain:

Only Gatsby, the man who gives his name to this book, was exempt from my reaction—Gatsby who represented everything for which I have an unaffected scorn. If personality is an unbroken series of successful gestures, then there was something gorgeous about him, some heightened sensitivity to the promises of life, as if he were related to one of those intricate machines that register earthquakes ten thousand miles away. (Fitzgerald 4)

What are the main differences between APA and MLA?

APA and MLA style both use parenthetical in-text citations to cite sources and include a full list of references at the end, but they differ in other ways:

Which citation style should I use?

Check if your university or course guidelines specify which citation style to use. If the choice is left up to you, consider which style is most commonly used in your field.

Other more specialized styles exist for certain fields, such as Bluebook and OSCOLA for law.

The most important thing is to choose one style and use it consistently throughout your text.

APA format is widely used by professionals, researchers, and students in the social and behavioral sciences, including fields like education, psychology, and business.

Be sure to check the guidelines of your university or the journal you want to be published in to double-check which style you should be using.

MLA Style is the second most used citation style (after APA). It is mainly used by students and researchers in humanities fields such as literature, languages, and philosophy.

There are many different citation styles, but they typically use one of three systems: parenthetical, note, or numerical citations.
356

How to cite a book

The format of a book citation depends on the citation style, but it always includes the author, title, publisher, and year.
12

How to cite a journal article

I got a 15 point deduction from my instructor for APA having a reference I did not cite. I thought with APA you could reference even if you do not put in a direct quote or citation. Can you clarify? Is there any articles to clarify for my school appeal.

APA style generally recommends including only sources closely linked to your paper, not additional sources used for background. In the 7th edition of the APA manual (p. 282), they instruct you to "include only the works that you used in the research for and preparation of your paper. [...] A reference list cites works that specifically support the ideas, claims, and concepts in a paper." It doesn't specifically say never to include sources you don't cite, but the general idea is to keep it focused. Not sure if that helps with your situation, but that's the general guideline presented by APA.

If my college professor asked for an annotated bib in APA format, does that mean a full paper including an abstract, graph, and pie chart? Or do I just do a regular annotated bib but with the APA style. For example, just the title page and the correct margins and headers.

It's best to check with your professor directly, but I would guess that you simply need to submit an annotated bibliography with the title page, headers and references formatted in APA style.