Including mediators and moderators in your research helps you go beyond studying a simple relationship between two variables for a fuller picture of the real world. These variables are important to consider when studying complex correlational or causal relationships between variables.

In a moderation relationship, you can draw an arrow from the moderator to the relationship between an independent and dependent variable. 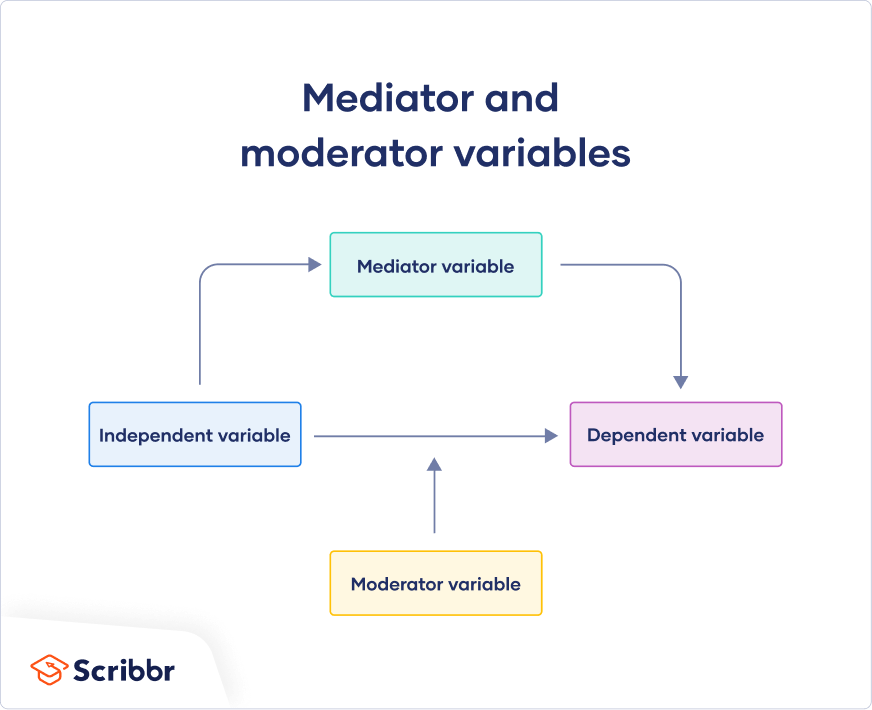 If something is a mediator:

Mediation analysis is a way of statistically testing whether a variable is a mediator using linear regression analyses or ANOVAs.

In full mediation, a mediator fully explains the relationship between the independent and dependent variable: without the mediator in the model, there is no relationship.

In partial mediation, there is still a statistical relationship between the independent and dependent variable even when the mediator is taken out of a model: the mediator only partially explains the relationship.

A moderator influences the level, direction, or presence of a relationship between variables. It shows you for whom, when, or under what circumstances a relationship will hold.

Moderators usually help you judge the external validity of your study by identifying the limitations of when the relationship between variables holds. For example, while social media use can predict levels of loneliness, this relationship may be stronger for adolescents than for older adults. Age is a moderator here.

What’s the difference between a mediator and a moderator?

A mediator variable explains the process through which two variables are related, while a moderator variable affects the strength and direction of that relationship.

What’s the difference between a confounder and a mediator?

A confounder is a third variable that affects variables of interest and makes them seem related when they are not. In contrast, a mediator is the mechanism of a relationship between two variables: it explains the process by which they are related.

Why should you include mediators and moderators in a study?

Including mediators and moderators in your research helps you go beyond studying a simple relationship between two variables for a fuller picture of the real world. They are important to consider when studying complex correlational or causal relationships.

Mediators are part of the causal pathway of an effect, and they tell you how or why an effect takes place. Moderators usually help you judge the external validity of your study by identifying the limitations of when the relationship between variables holds.

How can you tell if something is a mediator?

If something is a mediating variable:

A control variable is anything that is held constant in a study to prevent it from interfering with the results.
241

In a cause-and-effect study, a confounding variable is an unmeasured variable that influences both the supposed cause and effect.
553