Homogeneity of variance (homoscedasticity): the size of the error in our prediction doesn’t change significantly across the values of the independent variable.

Independence of observations: the observations in the dataset were collected using statistically valid sampling methods, and there are no hidden relationships among variables.

Linearity: the line of best fit through the data points is a straight line, rather than a curve or some sort of grouping factor.

How to perform a multiple linear regression

The formula for a multiple linear regression is:

It then calculates the t statistic and p value for each regression coefficient in the model.

While it is possible to do multiple linear regression by hand, it is much more commonly done via statistical software. We are going to use R for our examples because it is free, powerful, and widely available. Download the sample dataset to try it yourself.

Load the heart.data dataset into your R environment and run the following code:

This code takes the data set heart.data and calculates the effect that the independent variables biking and smoking have on the dependent variable heart disease using the equation for the linear model: lm().

Learn more by following the full step-by-step guide to linear regression in R.

To view the results of the model, you can use the summary() function:

This function takes the most important parameters from the linear model and puts them into a table that looks like this: 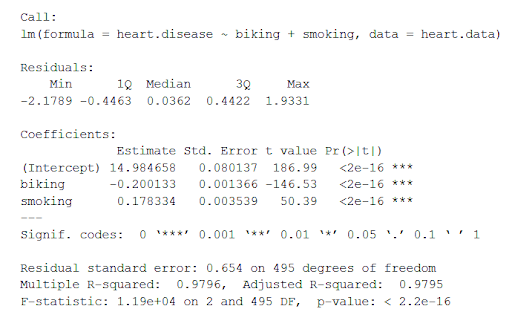 The summary first prints out the formula (‘Call’), then the model residuals (‘Residuals’). If the residuals are roughly centered around zero and with similar spread on either side, as these do (median 0.03, and min and max around -2 and 2) then the model probably fits the assumption of heteroscedasticity.

The most important things to note in this output table are the next two tables – the estimates for the independent variables.

The Std.error column displays the standard error of the estimate. This number shows how much variation there is around the estimates of the regression coefficient.

The Pr( > | t | ) column shows the p value. This shows how likely the calculated t value would have occurred by chance if the null hypothesis of no effect of the parameter were true.

Because these values are so low (p < 0.001 in both cases), we can reject the null hypothesis and conclude that both biking to work and smoking both likely influence rates of heart disease.

Visualizing the results in a graph 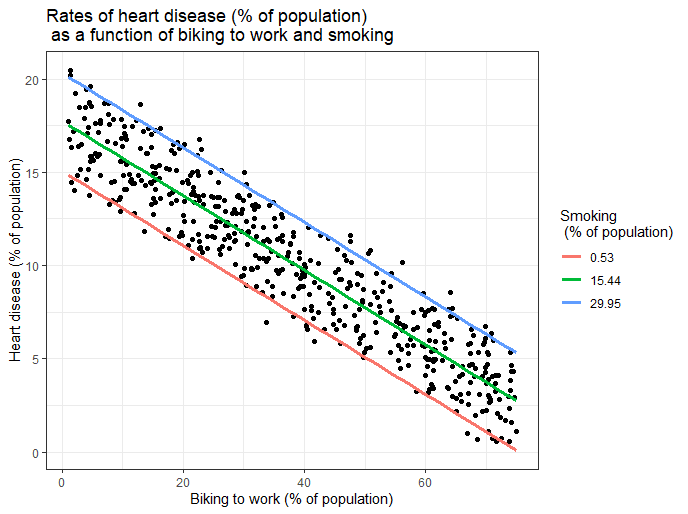 Here, we have calculated the predicted values of the dependent variable (heart disease) across the full range of observed values for the percentage of people biking to work.

To include the effect of smoking on the independent variable, we calculated these predicted values while holding smoking constant at the minimum, mean, and maximum observed rates of smoking.

What is a regression model?

What is multiple linear regression?

How is the error calculated in a linear regression model?

Linear regression most often uses mean-square error (MSE) to calculate the error of the model. MSE is calculated by:

Linear regression fits a line to the data by finding the regression coefficient that results in the smallest MSE.

Simple linear regression is a model that describes the relationship between one dependent and one independent variable using a straight line.
630

A t test is a statistical test used to compare the means of two groups. The type of t test you use depends on what you want to find out.
1728

Variables can be defined by the type of data (quantitative or categorical) and by the part of the experiment (independent or dependent).
1539