Any normal distribution can be standardized by converting its values into z scores. Z scores tell you how many standard deviations from the mean each value lies. 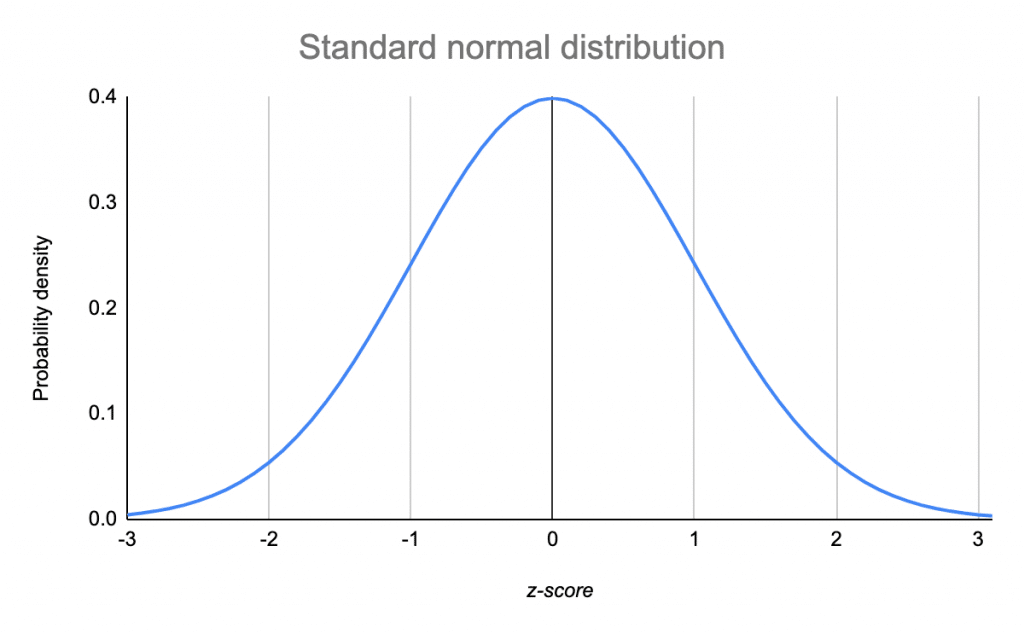 Converting a normal distribution into a z-distribution allows you to calculate the probability of certain values occurring and to compare different data sets.

You can calculate the standard normal distribution with our calculator below. 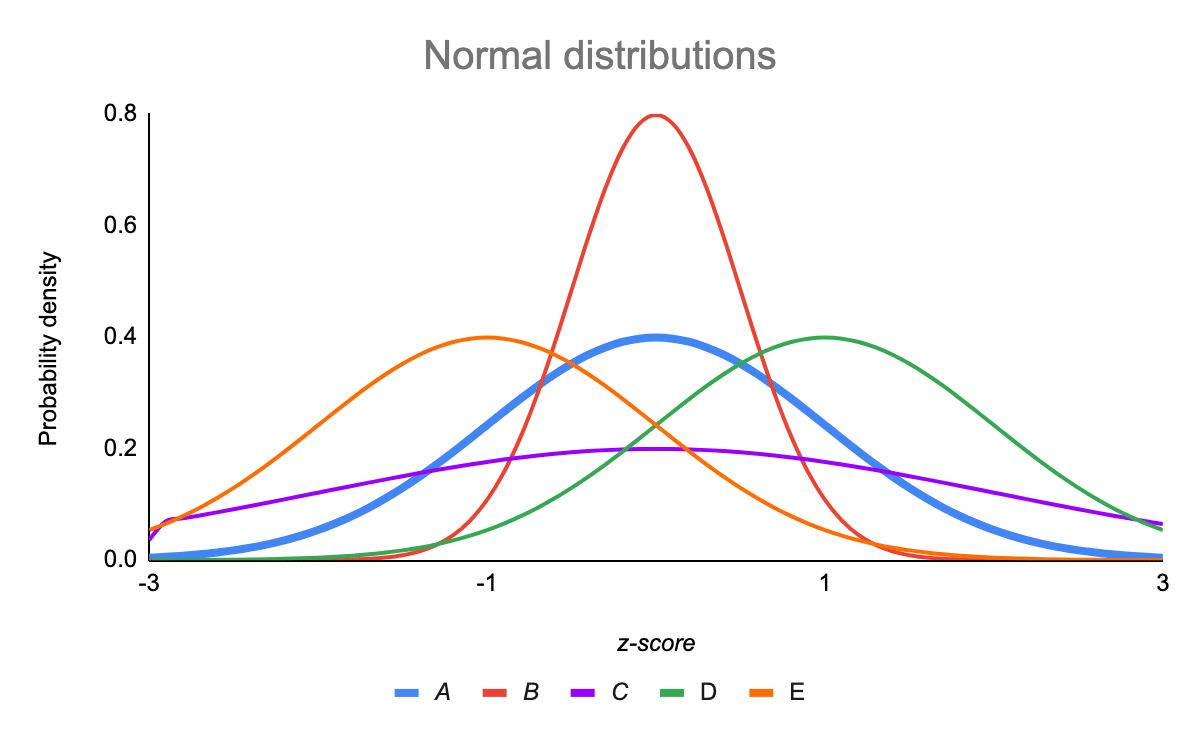 Scribbr editors not only correct grammar and spelling mistakes, but also strengthen your writing by making sure your paper is free of vague language, redundant words, and awkward phrasing.

While data points are referred to as x in a normal distribution, they are called z or z scores in the z distribution. A z score is a standard score that tells you how many standard deviations away from the mean an individual value (x) lies:

How to calculate a z score

To standardize a value from a normal distribution, convert the individual value into a z-score:

Use the standard normal distribution to find probability

Every z score has an associated p value that tells you the probability of all values below or above that z score occuring. This is the area under the curve left or right of that z score. 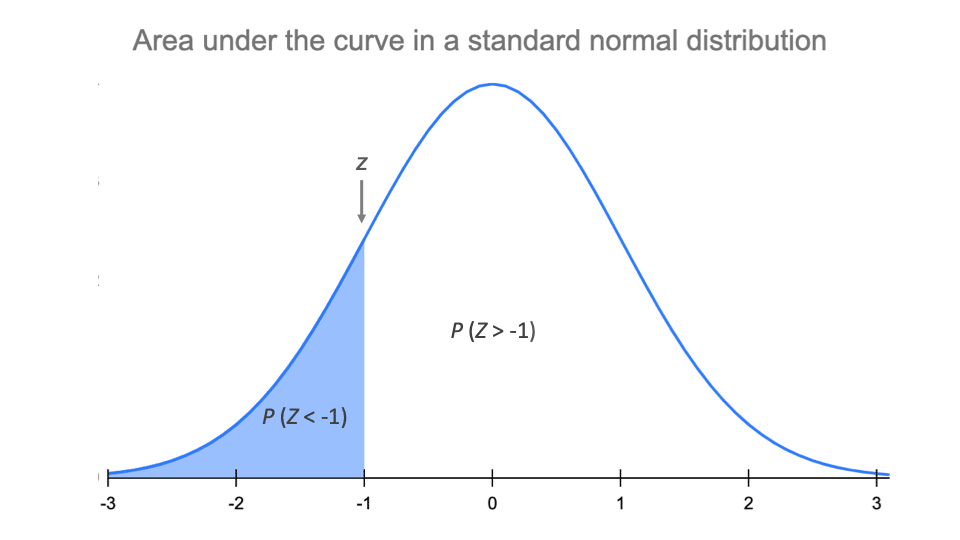 The area under the curve to the right of a z score is the p value, and it’s the likelihood of your observation occurring if the null hypothesis is true.

Usually, a p value of 0.05 or less means that your results are unlikely to have arisen by chance; it indicates a statistically significant effect.

By converting a value in a normal distribution into a z score, you can easily find the p value for a z test.

How to use a z table

Once you have a z score, you can look up the corresponding probability in a z table.

In a z table, the area under the curve is reported for every z value between -4 and 4 at intervals of 0.01.

There are a few different formats for the z table. Here, we use a portion of the cumulative table. This table tells you the total area under the curve up to a given z score—this area is equal to the probability of values below that z score occurring.

The first column of a z table contains the z score up to the first decimal place. The top row of the table gives the second decimal place.

To find the corresponding area under the curve (probability) for a z score:

Let’s walk through an invented research example to better understand how the standard normal distribution works.

As a sleep researcher, you’re curious about how sleep habits changed during COVID-19 lockdowns. You collect sleep duration data from a sample during a full lockdown.

Before the lockdown, the population mean was 6.5 hours of sleep. The lockdown sample mean is 7.62.

To assess whether your sample mean significantly differs from the pre-lockdown population mean, you perform a z test:

To compare sleep duration during and before the lockdown, you convert your lockdown sample mean into a z score using the pre-lockdown population mean and standard deviation.

A z score of 2.24 means that your sample mean is 2.24 standard deviations greater than the population mean.

To find the probability of your sample mean z score of 2.24 or less occurring, you use the z table to find the value at the intersection of row 2.2 and column +0.04. 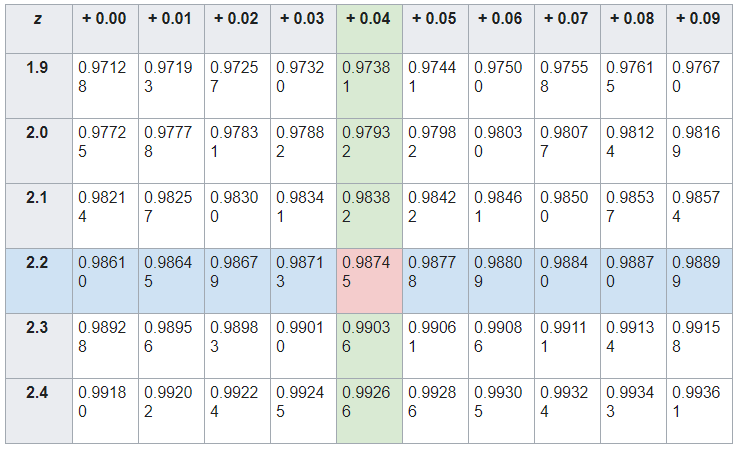 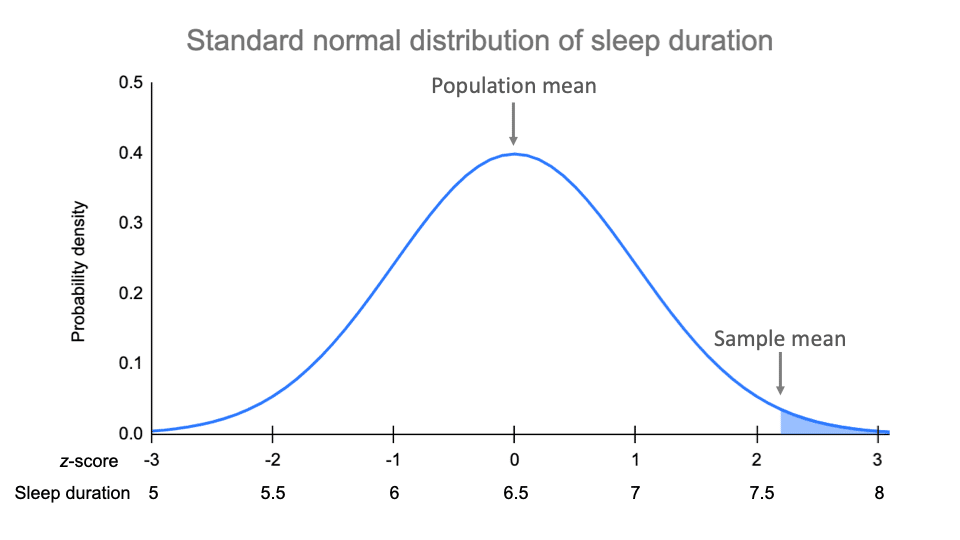 A p value of less than 0.05 or 5% means that the sample significantly differs from the population.

With a p value of less than 0.05, you can conclude that average sleep duration in the COVID-19 lockdown was significantly higher than the pre-lockdown average. 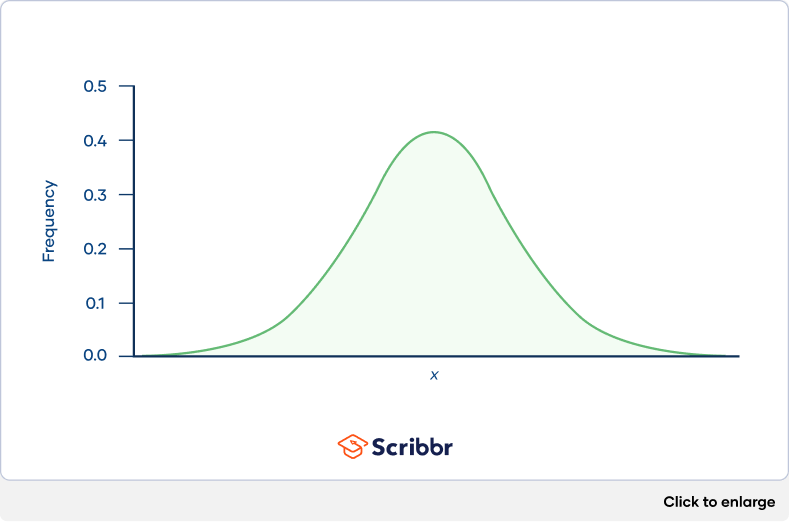 What is a standard normal distribution?

What is the empirical rule?

The empirical rule, or the 68-95-99.7 rule, tells you where most of the values lie in a normal distribution:

What is the difference between the t-distribution and the standard normal distribution?

In this way, the t-distribution is more conservative than the standard normal distribution: to reach the same level of confidence or statistical significance, you will need to include a wider range of the data.

In a normal distribution, data is symmetrically distributed with no skew and follows a bell curve.
776

The p-value shows the likelihood of your data occurring under the null hypothesis. P-values help determine statistical significance.
870