It is a type of normal distribution used for smaller sample sizes, where the variance in the data is unknown. 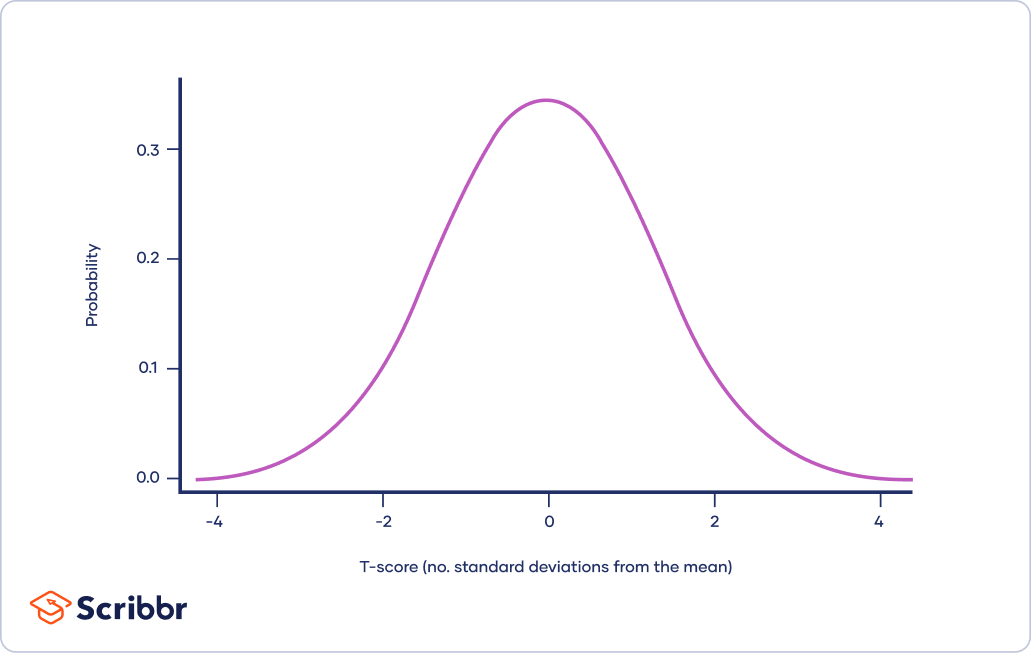 In statistics, the t-distribution is most often used to:

The t-distribution is a type of normal distribution that is used for smaller sample sizes. Normally-distributed data form a bell shape when plotted on a graph, with more observations near the mean and fewer observations in the tails.

The t-distribution is used when data are approximately normally distributed, which means the data follow a bell shape but the population variance is unknown. The variance in a t-distribution is estimated based on the degrees of freedom of the data set (total number of observations minus 1).

As the degrees of freedom (total number of observations minus 1) increases, the t-distribution will get closer and closer to matching the standard normal distribution, a.k.a. the z-distribution, until they are almost identical. 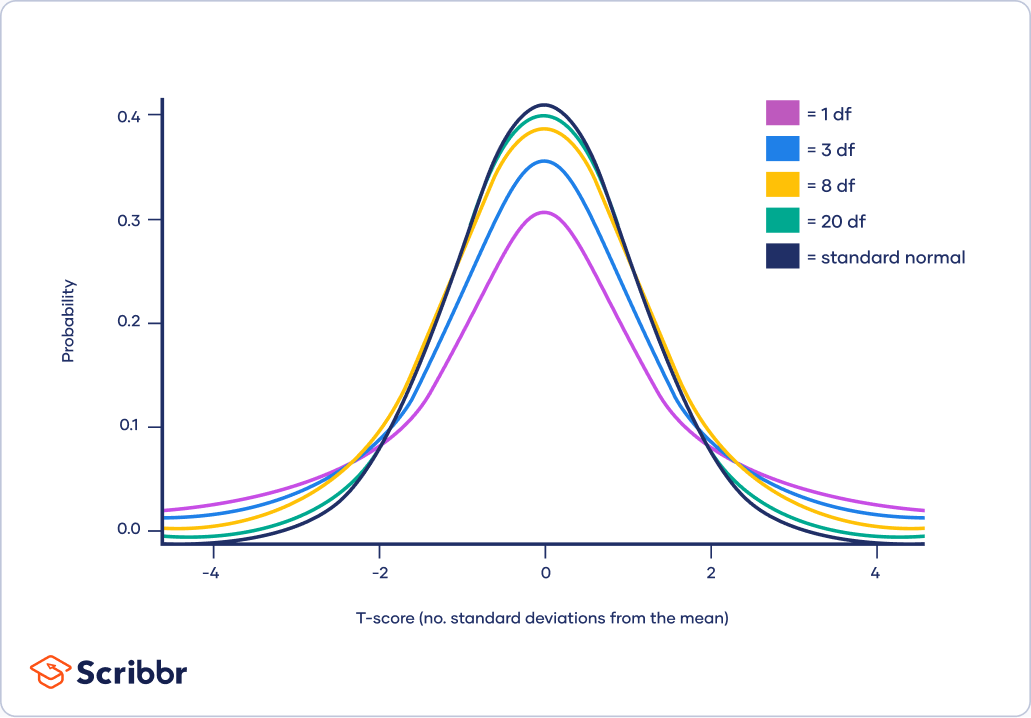 A t-score is the number of standard deviations from the mean in a t-distribution. You can typically look up a t-score in a t-table, or by using an online t-score calculator.

In statistics, t-scores are primarily used to find two things:

The test statistic for t-tests and regression tests is the t-score. While most statistical programs will automatically calculate the corresponding p-value for the t-score, you can also look up the values in a t-table, using your degrees of freedom and t-score to find the p-value.

The t-score which generates a p-value below your threshold for statistical significance is known as the critical value of t, or t*.

Frequently asked questions about the t-distribution

The t-distribution is a way of describing a set of observations where most observations fall close to the mean, and the rest of the observations make up the tails on either side. It is a type of normal distribution used for smaller sample sizes, where the variance in the data is unknown.

The t-distribution forms a bell curve when plotted on a graph. It can be described mathematically using the mean and the standard deviation.

What is the difference between the t-distribution and the standard normal distribution?

In this way, the t-distribution is more conservative than the standard normal distribution: to reach the same level of confidence or statistical significance, you will need to include a wider range of the data.

What is a t-score?

A t-score (a.k.a. a t-value) is equivalent to the number of standard deviations away from the mean of the t-distribution.

The t-score is the test statistic used in t-tests and regression tests. It can also be used to describe how far from the mean an observation is when the data follow a t-distribution.

What is a test statistic?

A test statistic is a number calculated by a statistical test. It describes how far your observed data is from the null hypothesis of no relationship between variables or no difference among sample groups.

What is a critical value?

A critical value is the value of the test statistic which defines the upper and lower bounds of a confidence interval, or which defines the threshold of statistical significance in a statistical test. It describes how far from the mean of the distribution you have to go to cover a certain amount of the total variation in the data (i.e. 90%, 95%, 99%).

If you are constructing a 95% confidence interval and are using a threshold of statistical significance of p = 0.05, then your critical value will be identical in both cases.

In a normal distribution, data is symmetrically distributed with no skew and follows a bell curve.
212

An introduction to t-tests

A t-test is a statistical test used to compare the means of two groups. The type of t-test you use depends on what you want to find out.
833