In descriptive statistics, the interquartile range tells you the spread of the middle half of your distribution.

Quartiles segment any distribution that’s ordered from low to high into four equal parts. The interquartile range (IQR) contains the second and third quartiles, or the middle half of your data set. Calculate the interquartile range by hand

The interquartile range is found by subtracting the Q1 value from the Q3 value:

Methods for finding the interquartile range

Although there’s only one formula, there are various different methods for identifying the quartiles. You’ll get a different value for the interquartile range depending on the method you use.

Here, we’ll discuss two of the most commonly used methods. These methods differ based on how they use the median.

The procedure for finding the median is different depending on whether your data set is odd- or even-numbered.

Steps for the exclusive method

To see how the exclusive method works by hand, we’ll use two examples: one with an even number of data points, and one with an odd number.

This time we’ll use a data set with 11 values.

Steps for the inclusive method

Almost all of the steps for the inclusive and exclusive method are identical. The difference is in how the data set is separated into two halves.

The inclusive method is sometimes preferred for odd-numbered data sets because it doesn’t ignore the median, a real value in this type of data set.

When is the interquartile range useful?

The interquartile range is an especially useful measure of variability for skewed distributions.

For these frequency distributions, the median is the best measure of central tendency because it’s the value exactly in the middle when all values are ordered from low to high.

Along with the median, the IQR can give you an overview of where most of your values lie and how clustered they are.

The IQR is also useful for datasets with outliers. Because it’s based on the middle half of the distribution, it’s less influenced by extreme values.

Visualize the interquartile range in boxplots

A boxplot, or a box-and-whisker plot, summarizes a data set visually using a five-number summary.

Every distribution can be organized using these five numbers:

The vertical lines in the box show Q1, the median, and Q3, while the whiskers at the ends show the highest and lowest values. 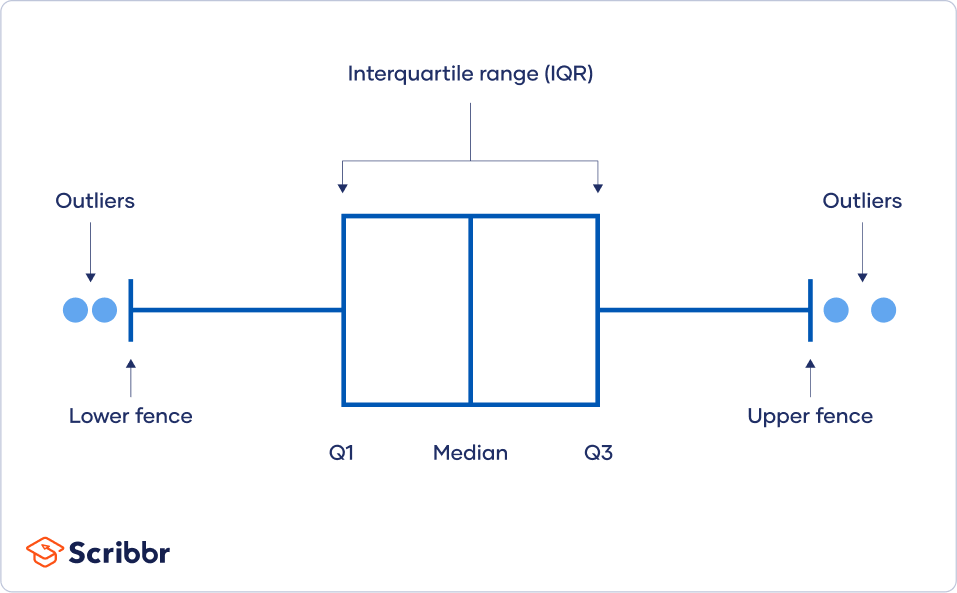 Boxplots are especially useful for showing the central tendency and dispersion of skewed distributions. What are the 4 main measures of variability?

Variability is most commonly measured with the following descriptive statistics:

What’s the difference between the range and interquartile range?

When should I use the interquartile range?

The interquartile range is the best measure of variability for skewed distributions or data sets with outliers. Because it’s based on values that come from the middle half of the distribution, it’s unlikely to be influenced by outliers.

What are the two main methods for calculating interquartile range?

The two most common methods for calculating interquartile range are the exclusive and inclusive methods.

Measures of variability describe how far apart data points lie from each other and from the center of a distribution.
441

How to Find the Range of a Data Set | Calculator & Formula

In statistics, the range is the spread of your data from the lowest to the highest value in the distribution.
446

How to Find the Median | Definition, Examples & Calculator

The median is the value that’s exactly in the middle of a data set when it is ordered.
110