Interval Data and How to Analyze It | Definitions & Examples

Interval data is measured along a numerical scale that has equal distances between adjacent values. These distances are called “intervals.”

Common examples of interval scales include standardized tests, such as the SAT, and psychological inventories. 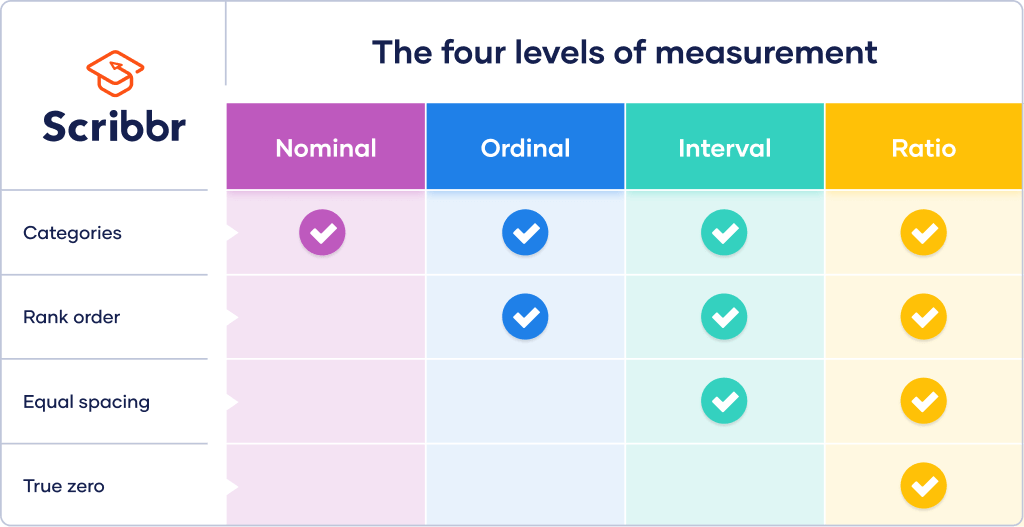 Interval and ratio scales both have equal intervals between values. However, only ratio scales have a true zero that represents a total absence of the variable.

In contrast, the Kelvin temperature scale is a ratio scale. In the Kelvin scale, nothing can be colder than 0 K. Therefore, temperature ratios in Kelvin are meaningful: 20 K is twice as hot as 10 K.

Psychological concepts like intelligence are often quantified through operationalization in tests or inventories. These tests have equal intervals between scores, but they do not have true zeros because they cannot measure “zero intelligence” or “zero personality.”

To identify whether a scale is interval or ordinal, consider whether it uses values with fixed measurement units, where the distances between any two points are of known size. For example:

Treating your data as interval data allows for more powerful statistical tests to be performed.

To get an overview of your data, you can first gather the following descriptive statistics:

Tables and graphs can be used to organize your data and visualize its distribution.

From your graph, you can see that your data is fairly normally distributed. Since there is no skew, to find where most of your values lie, you can use all 3 common measures of central tendency: the mode, median and mean.

The mean is usually considered the best measure of central tendency when you have normally distributed quantitative data. That’s because it uses every single value in your data set for the computation, unlike the mode or the median.

Now that you have an overview of your data, you can select appropriate tests for making statistical inferences. With a normal distribution of interval data, both parametric and non-parametric tests are possible.

The following parametric tests are some of the most common ones applied to test hypotheses about interval data.

What are the four levels of measurement?

What is the difference between interval and ratio data?

While interval and ratio data can both be categorized, ranked, and have equal spacing between adjacent values, only ratio scales have a true zero.

For example, temperature in Celsius or Fahrenheit is at an interval scale because zero is not the lowest possible temperature. In the Kelvin scale, a ratio scale, zero represents a total lack of thermal energy.

Individual Likert-type questions are generally considered ordinal data, because the items have clear rank order, but don’t have an even distribution.

Overall Likert scale scores are sometimes treated as interval data. These scores are considered to have directionality and even spacing between them.

The type of data determines what statistical tests you should use to analyze your data.

Nominal data can be labelled or classified into mutually exclusive categories, but with no meaningful order between them.
254

Ordinal data can be classified into categories that are ranked in a natural order. It is one of 4 levels of measurement.
301