If you have more than one independent variable, use multiple linear regression instead.

Simple linear regression is a parametric test, meaning that it makes certain assumptions about the data. These assumptions are:

If your data do not meet the assumptions of homoscedasticity or normality, you may be able to use a nonparametric test instead, such as the Spearman rank test.

If your data violate the assumption of independence of observations (e.g., if observations are repeated over time), you may be able to perform a linear mixed-effects model that accounts for the additional structure in the data.

How to perform a simple linear regression

The formula for a simple linear regression is:

Linear regression finds the line of best fit line through your data by searching for the regression coefficient (B1) that minimizes the total error (e) of the model.

While you can perform a linear regression by hand, this is a tedious process, so most people use statistical programs to help them quickly analyze the data.

R is a free, powerful, and widely-used statistical program. Download the dataset to try it yourself using our income and happiness example.

Load the income.data dataset into your R environment, and then run the following command to generate a linear model describing the relationship between income and happiness:

This code takes the data you have collected data = income.data and calculates the effect that the independent variable income has on the dependent variable happiness using the equation for the linear model: lm().

To learn more, follow our full step-by-step guide to linear regression in R.

To view the results of the model, you can use the summary() function in R:

This function takes the most important parameters from the linear model and puts them into a table, which looks like this: 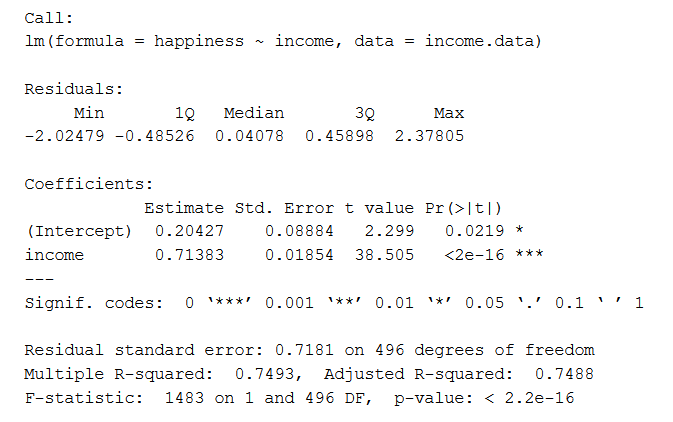 This output table first repeats the formula that was used to generate the results (‘Call’), then summarizes the model residuals (‘Residuals’), which give an idea of how well the model fits the real data.

Next is the ‘Coefficients’ table. The first row gives the estimates of the y-intercept, and the second row gives the regression coefficient of the model.

Row 1 of the table is labeled (Intercept). This is the y-intercept of the regression equation, with a value of 0.20. You can plug this into your regression equation if you want to predict happiness values across the range of income that you have observed:

The next row in the ‘Coefficients’ table is income. This is the row that describes the estimated effect of income on reported happiness:

The Estimate column is the estimated effect, also called the regression coefficient or r2 value. The number in the table (0.713) tells us that for every one unit increase in income (where one unit of income = 10,000) there is a corresponding 0.71-unit increase in reported happiness (where happiness is a scale of 1 to 10).

The Std. Error column displays the standard error of the estimate. This number shows how much variation there is in our estimate of the relationship between income and happiness.

The Pr(>| t |) column shows the p value. This number tells us how likely we are to see the estimated effect of income on happiness if the null hypothesis of no effect were true.

Because the p value is so low (p < 0.001), we can reject the null hypothesis and conclude that income has a statistically significant effect on happiness.

The last three lines of the model summary are statistics about the model as a whole. The most important thing to notice here is the p value of the model. Here it is significant (p < 0.001), which means that this model is a good fit for the observed data.

It can also be helpful to include a graph with your results. For a simple linear regression, you can simply plot the observations on the x and y axis and then include the regression line and regression function: 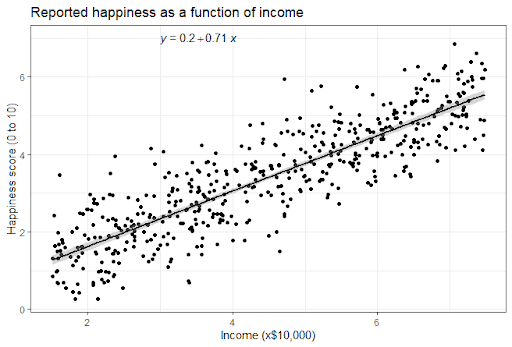 Can you predict values outside the range of your data?

No! We often say that regression models can be used to predict the value of the dependent variable at certain values of the independent variable. However, this is only true for the range of values where we have actually measured the response. 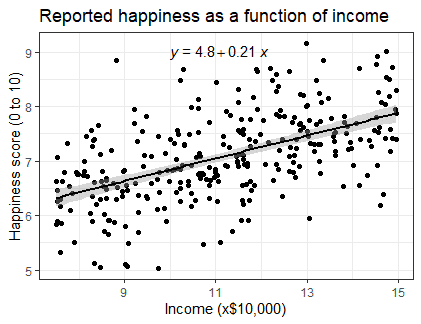 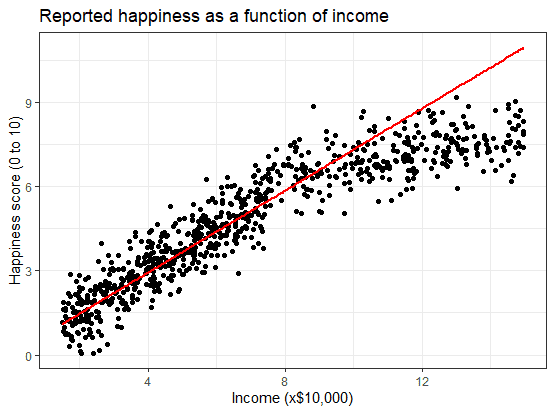 What if we hadn’t measured this group, and instead extrapolated the line from the 15–75k incomes to the 70–150k incomes?

You can see that if we simply extrapolated from the 15–75k income data, we would overestimate the happiness of people in the 75–150k income range. 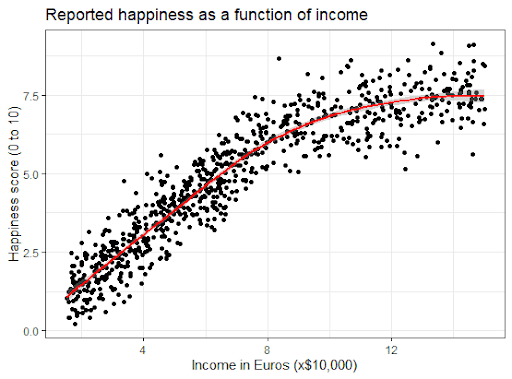 If we instead fit a curve to the data, it seems to fit the actual pattern much better.

It looks as though happiness actually levels off at higher incomes, so we can’t use the same regression line we calculated from our lower-income data to predict happiness at higher levels of income.

Even when you see a strong pattern in your data, you can’t know for certain whether that pattern continues beyond the range of values you have actually measured. Therefore, it’s important to avoid extrapolating beyond what the data actually tell you.

What is a regression model?

What is simple linear regression?

How is the error calculated in a linear regression model?

Linear regression most often uses mean-square error (MSE) to calculate the error of the model. MSE is calculated by:

Linear regression fits a line to the data by finding the regression coefficient that results in the smallest MSE.

A t test is a statistical test used to compare the means of two groups. The type of t test you use depends on what you want to find out.
1839

To perform linear regression in R, there are 6 main steps. Use our sample data and code to perform simple or multiple regression.
858