Variability describes how far apart data points lie from each other and from the center of a distribution. Along with measures of central tendency, measures of variability give you descriptive statistics that summarize your data.

Variability is also referred to as spread, scatter or dispersion. It is most commonly measured with the following:

Why does variability matter?

While the central tendency, or average, tells you where most of your points lie, variability summarizes how far apart they are. This is important because the amount of variability determines how well you can generalize results from the sample to your population.

Low variability is ideal because it means that you can better predict information about the population based on sample data. High variability means that the values are less consistent, so it’s harder to make predictions.

The range tells you the spread of your data from the lowest to the highest value in the distribution. It’s the easiest measure of variability to calculate.

To find the range, simply subtract the lowest value from the highest value in the data set.

Because only 2 numbers are used, the range is influenced by outliers and doesn’t give you any information about the distribution of values. It’s best used in combination with other measures.

The interquartile range gives you the spread of the middle of your distribution. 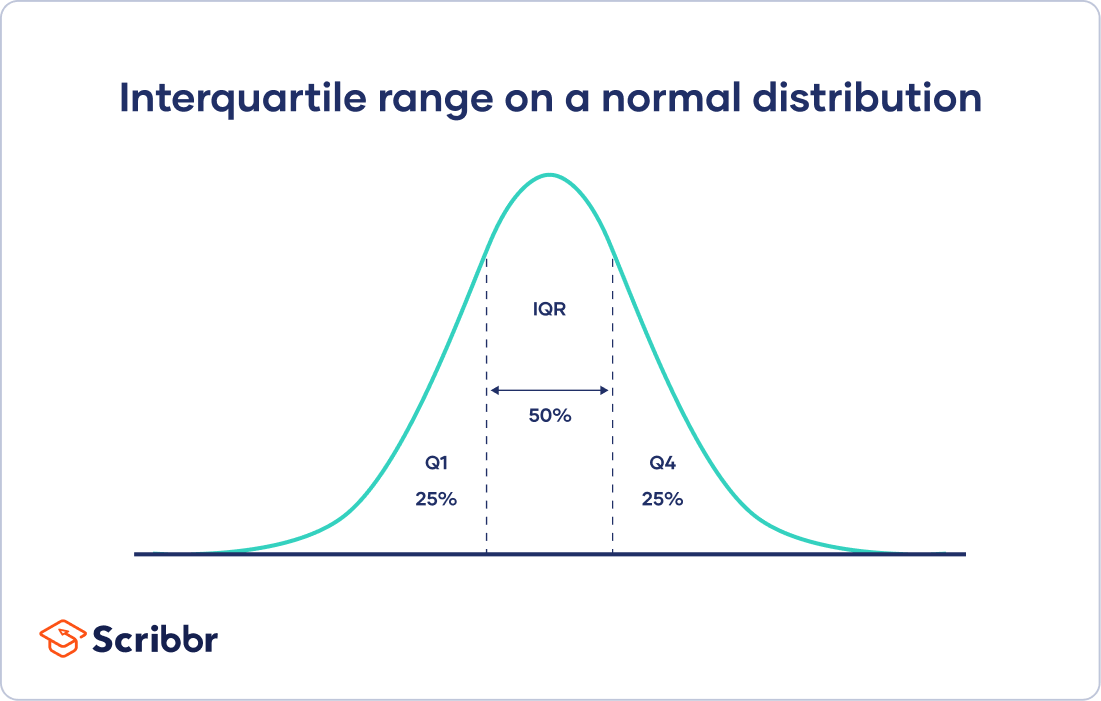 The interquartile range is the third quartile (Q3) minus the first quartile (Q1). This gives us the range of the middle half of a data set.

Just like the range, the interquartile range uses only 2 values in its calculation. But the IQR is less affected by outliers: the 2 values come from the middle half of the data set, so they are unlikely to be extreme scores.

The IQR gives a consistent measure of variability for skewed as well as normal distributions.

Every distribution can be organized using a five-number summary:

These five-number summaries can be easily visualized using box and whisker plots.

The standard deviation is the average amount of variability in your dataset.

It tells you, on average, how far each score lies from the mean. The larger the standard deviation, the more variable the data set is.

There are six steps for finding the standard deviation by hand:

If you have data from the entire population, use the population standard deviation formula:

If you have data from a sample, use the sample standard deviation formula:

Why use n – 1 for sample standard deviation?

Samples are used to make statistical inferences about the population that they came from.

But when you use sample data, your sample standard deviation is always used as an estimate of the population standard deviation. Using n in this formula tends to give you a biased estimate that consistently underestimates variability.

Reducing the sample n to n – 1 makes the standard deviation artificially large, giving you a conservative estimate of variability.

While this is not an unbiased estimate, it is a less biased estimate of standard deviation: it is better to overestimate rather than underestimate variability in samples.

The difference between biased and conservative estimates of standard deviation gets much smaller when you have a large sample size.

Variance is the square of the standard deviation. This means that the units of variance are much larger than those of a typical value of a data set.

Variance reflects the degree of spread in the data set. The more spread the data, the larger the variance is in relation to the mean.

To find the variance by hand, perform all of the steps for standard deviation except for the final step.

Biased versus unbiased estimates of variance

An unbiased estimate in statistics is one that doesn’t consistently give you either high values or low values – it has no systematic bias.

In this case, bias is not only lowered but totally removed. The sample variance formula gives completely unbiased estimates of variance.

So why isn’t the sample standard deviation also an unbiased estimate?

What’s the best measure of variability?

The best measure of variability depends on your level of measurement and distribution.

For data measured at an ordinal level, the range and interquartile range are the only appropriate measures of variability.

For more complex interval and ratio levels, the standard deviation and variance are also applicable.

For normal distributions, all measures can be used. The standard deviation and variance are preferred because they take your whole data set into account, but this also means that they are easily influenced by outliers.

For skewed distributions or data sets with outliers, the interquartile range is the best measure. It’s least affected by extreme values because it focuses on the spread in the middle of the data set.

Variability tells you how far apart points lie from each other and from the center of a distribution or a data set.

Variability is also referred to as spread, scatter or dispersion.

What are the 4 main measures of variability?

Variability is most commonly measured with the following descriptive statistics:

What’s the difference between central tendency and variability?

While central tendency tells you where most of your data points lie, variability summarizes how far apart your points from each other.

Data sets can have the same central tendency but different levels of variability or vice versa. Together, they give you a complete picture of your data.

What’s the difference between descriptive and inferential statistics?

Descriptive statistics summarize the characteristics of a data set. Inferential statistics allow you to test a hypothesis or assess whether your data is generalizable to the broader population.

How to Find the Range of a Data Set | Formula & Examples

In statistics, the range is the spread of your data from the lowest to the highest value in the distribution.
410

The standard deviation is the average amount of variability in your dataset. It tells you, on average, how far each score lies from the mean.
1361

In a normal distribution, data is symmetrically distributed with no skew and follows a bell curve.
707