ANOVA (Analysis of Variance) is a statistical test used to analyze the difference between the means of more than two groups.

When to use a two-way ANOVA

A quantitative variable represents amounts or counts of things. It can be divided to find a group mean.

How does the ANOVA test work?

ANOVA tests for significance using the F test for statistical significance. The F test is a groupwise comparison test, which means it compares the variance in each group mean to the overall variance in the dependent variable.

If the variance within groups is smaller than the variance between groups, the F test will find a higher F value, and therefore a higher likelihood that the difference observed is real and not due to chance.

A two-way ANOVA with interaction tests three null hypotheses at the same time:

A two-way ANOVA without interaction (a.k.a. an additive two-way ANOVA) only tests the first two of these hypotheses.

Assumptions of the two-way ANOVA

To use a two-way ANOVA your data should meet certain assumptions.Two-way ANOVA makes all of the normal assumptions of a parametric test of difference:

The variation around the mean for each group being compared should be similar among all groups. If your data don’t meet this assumption, you may be able to use a non-parametric alternative, like the Kruskal-Wallis test.

Your independent variables should not be dependent on one another (i.e. one should not cause the other). This is impossible to test with categorical variables – it can only be ensured by good experimental design.

In addition, your dependent variable should represent unique observations – that is, your observations should not be grouped within locations or individuals.

If your data don’t meet this assumption (i.e. if you set up experimental treatments within blocks), you can include a blocking variable and/or use a repeated-measures ANOVA.

The values of the dependent variable should follow a bell curve (they should be normally distributed). If your data don’t meet this assumption, you can try a data transformation.

How to perform a two-way ANOVA

The dataset from our imaginary crop yield experiment includes observations of:

The two-way ANOVA will test whether the independent variables (fertilizer type and planting density) have an effect on the dependent variable (average crop yield). But there are some other possible sources of variation in the data that we want to take into account.

We applied our experimental treatment in blocks, so we want to know if planting block makes a difference to average crop yield. We also want to check if there is an interaction effect between two independent variables – for example, it’s possible that planting density affects the plants’ ability to take up fertilizer.

Because we have a few different possible relationships between our variables, we will compare three models:

By running all three versions of the two-way ANOVA with our data and then comparing the models, we can efficiently test which variables, and in which combinations, are important for describing the data, and see whether the planting block matters for average crop yield.

This is not the only way to do your analysis, but it is a good method for efficiently comparing models based on what you think are reasonable combinations of variables.

Running a two-way ANOVA in R

We will run our analysis in R. To try it yourself, download the sample dataset.

Sample dataset for a two-way ANOVA

After loading the data into the R environment, we will create each of the three models using the aov() command, and then compare them using the aictab() command. For a full walkthrough, see our guide to ANOVA in R.

This first model does not predict any interaction between the independent variables, so we put them together with a ‘+’.

In the second model, to test whether the interaction of fertilizer type and planting density influences the final yield, use a ‘ * ‘ to specify that you also want to know the interaction effect.

Because our crop treatments were randomized within blocks, we add this variable as a blocking factor in the third model. We can then compare our two-way ANOVAs with and without the blocking variable to see whether the planting location matters.

Now we can find out which model is the best fit for our data using AIC (Akaike information criterion) model selection.

AIC calculates the best-fit model by finding the model that explains the largest amount of variation in the response variable while using the fewest parameters. We can perform a model comparison in R using the aictab() function.

The AIC model with the best fit will be listed first, with the second-best listed next, and so on. This comparison reveals that the two-way ANOVA without any interaction or blocking effects is the best fit for the data.

Interpreting the results of a two-way ANOVA

You can view the summary of the two-way model in R using the summary() command. We will take a look at the results of the first model, which we found was the best fit for our data.

The following columns provide all of the information needed to interpret the model:

From this output we can see that both fertilizer type and planting density explain a significant amount of variation in average crop yield (p values < 0.001). 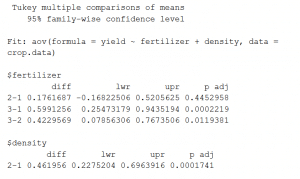 This output shows the pairwise differences between the three types of fertilizer ($fertilizer) and between the two levels of planting density ($density), with the average difference (‘diff’), the lower and upper bounds of the 95% confidence interval (‘lwr’ and ‘upr’) and the p value of the difference (‘p-adj’).

From the post-hoc test results, we see that there are significant differences (p < 0.05) between:

but no difference between fertilizer groups 2 and 1.

How to present the results of a a two-way ANOVA

Once you have your model output, you can report the results in the results section of your thesis, dissertation or research paper.

When reporting the results you should include the F statistic, degrees of freedom, and p value from your model output.

You can discuss what these findings mean in the discussion section of your paper.

You may also want to make a graph of your results to illustrate your findings.

Your graph should include the groupwise comparisons tested in the ANOVA, with the raw data points, summary statistics (represented here as means and standard error bars), and letters or significance values above the groups to show which groups are significantly different from the others. 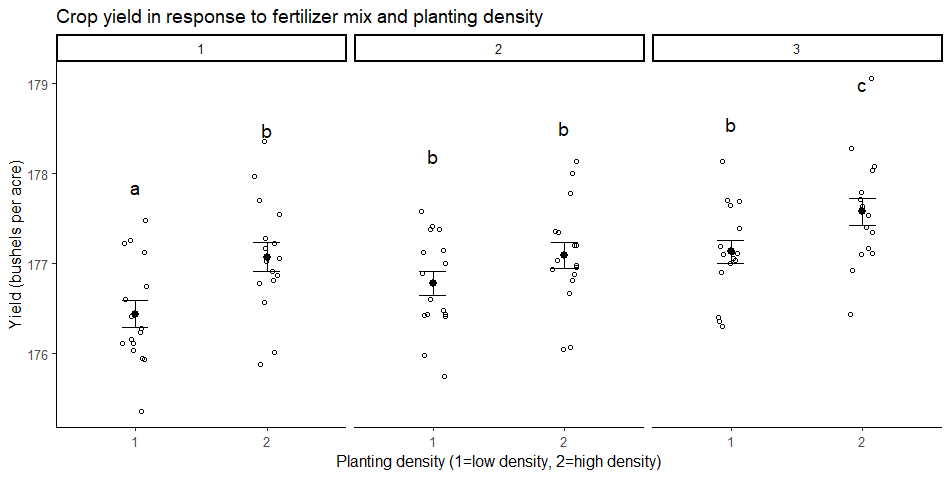 Using a sample dataset, we walk through the process of one-way and two-way ANOVA in 7 steps, from loading the data to reporting the results.
710

What is Variance? | Definition, Examples & Formulas

The variance reflects the variability of your dataset by taking the average of squared deviations from the mean.
1060