ANOVA, which stands for Analysis of Variance, is a statistical test used to analyze the difference between the means of more than two groups.

When to use a one-way ANOVA

The null hypothesis (H0) of ANOVA is that there is no difference among group means. The alternative hypothesis (Ha) is that at least one group differs significantly from the overall mean of the dependent variable.

If you only want to compare two groups, use a t test instead.

How does an ANOVA test work?

If any of the group means is significantly different from the overall mean, then the null hypothesis is rejected.

ANOVA uses the F test for statistical significance. This allows for comparison of multiple means at once, because the error is calculated for the whole set of comparisons rather than for each individual two-way comparison (which would happen with a t test).

The F test compares the variance in each group mean from the overall group variance. If the variance within groups is smaller than the variance between groups, the F test will find a higher F value, and therefore a higher likelihood that the difference observed is real and not due to chance.

The assumptions of the ANOVA test are the same as the general assumptions for any parametric test:

While you can perform an ANOVA by hand, it is difficult to do so with more than a few observations. We will perform our analysis in the R statistical program because it is free, powerful, and widely available. For a full walkthrough of this ANOVA example, see our guide to performing ANOVA in R.

The sample dataset from our imaginary crop yield experiment contains data about:

This gives us enough information to run various different ANOVA tests and see which model is the best fit for the data.

For the one-way ANOVA, we will only analyze the effect of fertilizer type on crop yield.

After loading the dataset into our R environment, we can use the command aov() to run an ANOVA. In this example we will model the differences in the mean of the response variable, crop yield, as a function of type of fertilizer.

To view the summary of a statistical model in R, use the summary() function.

The summary of an ANOVA test (in R) looks like this:

Because the p value of the independent variable, fertilizer, is statistically significant (p < 0.05), it is likely that fertilizer type does have a significant effect on average crop yield.

ANOVA will tell you if there are differences among the levels of the independent variable, but not which differences are significant. To find how the treatment levels differ from one another, perform a TukeyHSD (Tukey’s Honestly-Significant Difference) post-hoc test.

The Tukey test runs pairwise comparisons among each of the groups, and uses a conservative error estimate to find the groups which are statistically different from one another. 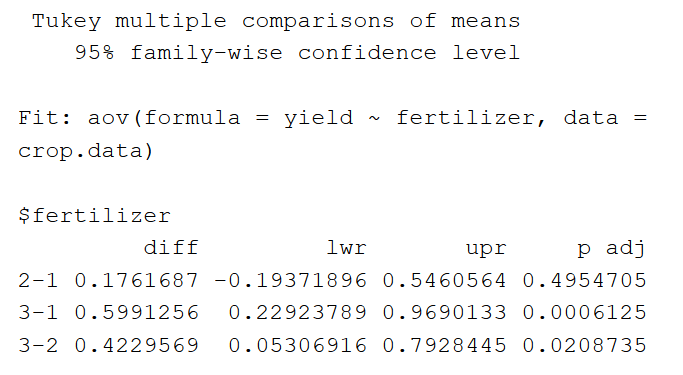 First, the table reports the model being tested (‘Fit’). Next it lists the pairwise differences among groups for the independent variable.

Under the ‘$fertilizer’ section, we see the mean difference between each fertilizer treatment (‘diff’), the lower and upper bounds of the 95% confidence interval (‘lwr’ and ‘upr’), and the p value, adjusted for multiple pairwise comparisons.

The pairwise comparisons show that fertilizer type 3 has a significantly higher mean yield than both fertilizer 2 and fertilizer 1, but the difference between the mean yields of fertilizers 2 and 1 is not statistically significant.

Reporting the results of ANOVA

When reporting the results of an ANOVA, include a brief description of the variables you tested, the  F value, degrees of freedom, and p values for each independent variable, and explain what the results mean.

If you want to provide more detailed information about the differences found in your test, you can also include a graph of the ANOVA results, with grouping letters above each level of the independent variable to show which groups are statistically different from one another: 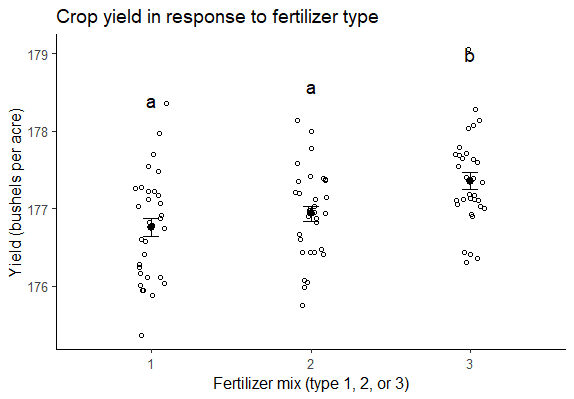 A two-way ANOVA is used to estimate how the mean of a quantitative variable changes according to the levels of two independent variables.
580

Using a sample dataset, we walk through the process of one-way and two-way ANOVA in 7 steps, from loading the data to reporting the results.
711

Experimental design is the process of planning an experiment to test a hypothesis. The choices you make affect the validity of your results.
1318