A ratio scale is a quantitative scale where there is a true zero and equal intervals between neighboring points. Unlike on an interval scale, a zero on a ratio scale means there is a total absence of the variable you are measuring.

Length, area, and population are examples of ratio scales.

The ratio level is the highest of four hierarchical levels of measurement. The levels, or scales, of measurement indicate how precisely data is recorded. The higher the level, the more complex the measurement is.

The ratio level contains all of the features of the other 3 levels. At the ratio level, values can be categorized, ordered, have equal intervals and take on a true zero. 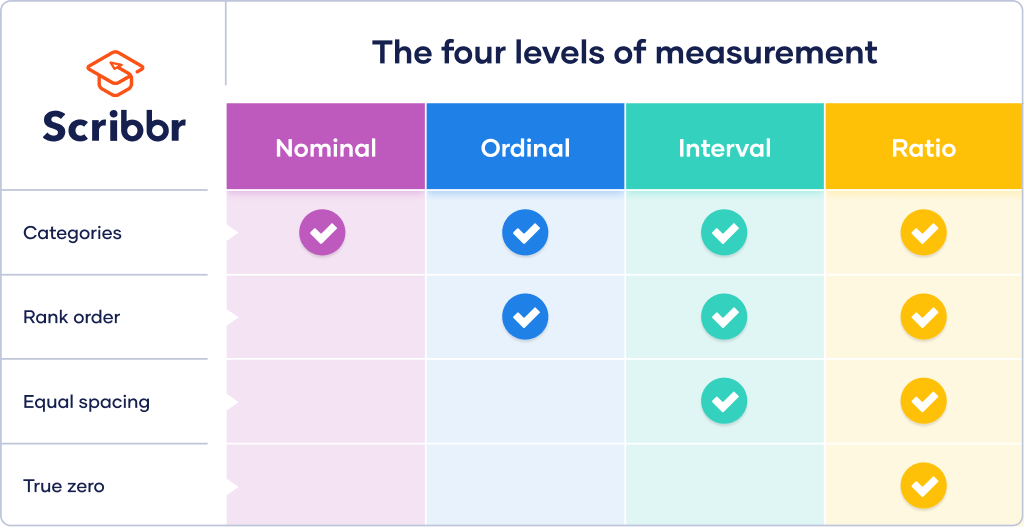 What is a true zero?

With a true zero in your scale, you can calculate ratios of values. For example, you can say that 4 children is twice as many as 2 children in a household. Similarly, 8 years is double 4 years of experience.

Some variables, such as temperature, can be measured on different scales. While Celsius and Fahrenheit are interval scales, Kelvin is a ratio scale.

In all 3 scales, there are equal intervals between neighboring points. However, unlike the Celsius and Fahrenheit scales where zero is just another temperature value, the Kelvin scale has a true zero (0 K) where nothing can be colder.

A true zero makes it possible to multiply, divide or square root values. Collecting data on a ratio level is always preferable to the other levels because it is the most precise.

Many variables in the natural and social sciences are measured using ratio scales.

Like interval variables, ratio variables can be discrete or continuous.

A discrete variable is expressed only in countable numbers (e.g., integers) while a continuous variable can potentially take on an infinite number of values.

After you’ve collected ratio data, you can gather descriptive and inferential statistics. Almost all statistical tests can be performed on ratio data because all mathematical operations are permissible.

To summarize your data, you can collect the following descriptive statistics:

You can get an overview of the frequency of different values in a table and visualize their distribution in a graph.

From your graph, you can see that your data is fairly normally distributed. Since there is no skew, to find where most of your values lie, you can use all 3 common measures of central tendency: the mode, median and mean.

The mean is usually considered the best measure of central tendency when you have normally distributed quantitative data. That’s because it uses every single value in your data set for the computation, unlike the mode or the median.

The coefficient of variation is a measure of spread that only applies to ratio variables.

Now that you have an overview of your data, you can select appropriate tests for statistical inferences. With a normal distribution of ratio data, parametric tests are best for testing hypotheses.

The following parametric tests are some of the most common ones applied to test hypotheses about ratio data.

What are the four levels of measurement?

What is the difference between interval and ratio data?

While interval and ratio data can both be categorized, ranked, and have equal spacing between adjacent values, only ratio scales have a true zero.

For example, temperature in Celsius or Fahrenheit is at an interval scale because zero is not the lowest possible temperature. In the Kelvin scale, a ratio scale, zero represents a total lack of thermal energy.

What is the difference between discrete and continuous variables?

Discrete and continuous variables are two types of quantitative variables:

Interval Data and How to Analyze It | Definitions & Examples

Interval data is measured along a numerical scale that has equal distances between adjacent values, but no true zero.
117

Your choice of statistical test depends on the types of variables you're dealing with and whether your data meets certain assumptions.
2546