Linear regression is a regression model that uses a straight line to describe the relationship between variables. It finds the line of best fit through your data by searching for the value of the regression coefficient(s) that minimizes the total error of the model.

There are two main types of linear regression:

In this step-by-step guide, we will walk you through linear regression in R using two sample datasets.

Getting started in R

As we go through each step, you can copy and paste the code from the text boxes directly into your script. To run the code, highlight the lines you want to run and click on the Run button on the top right of the text editor (or press ctrl + enter on the keyboard).

To install the packages you need for the analysis, run this code (you only need to do this once):

Next, load the packages into your R environment by running this code (you need to do this every time you restart R):

Step 1: Load the data into R

After you’ve loaded the data, check that it has been read in correctly using summary().

Because both our variables are quantitative, when we run this function we see a table in our console with a numeric summary of the data. This tells us the minimum, median, mean, and maximum values of the independent variable (income) and dependent variable (happiness):

Compare your paper with 99.3 billion webpages and 8 million publications.

Step 2: Make sure your data meet the assumptions

We can use R to check that our data meet the four main assumptions for linear regression.

If you know that you have autocorrelation within variables (i.e. multiple observations of the same test subject), then do not proceed with a simple linear regression! Use a structured model, like a linear mixed-effects model, instead.

To check whether the dependent variable follows a normal distribution, use the hist() function. 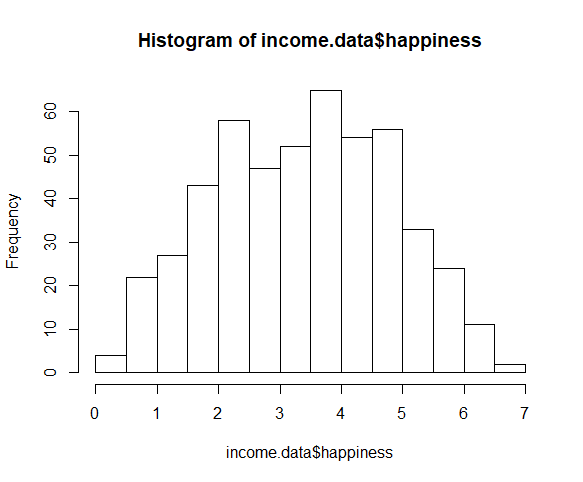 The observations are roughly bell-shaped (more observations in the middle of the distribution, fewer on the tails), so we can proceed with the linear regression.

The relationship between the independent and dependent variable must be linear. We can test this visually with a scatter plot to see if the distribution of data points could be described with a straight line. 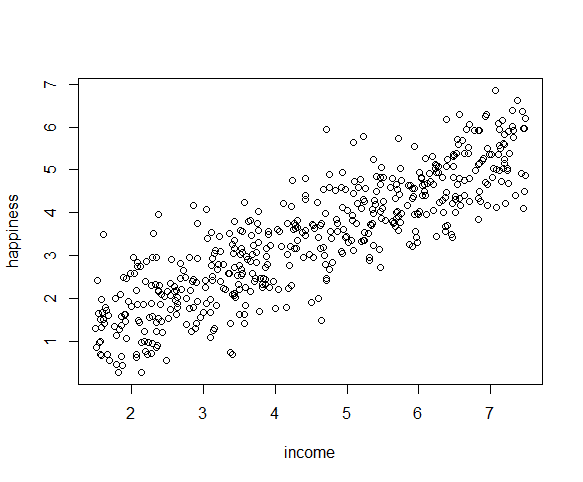 The relationship looks roughly linear, so we can proceed with the linear model.

This means that the prediction error doesn’t change significantly over the range of prediction of the model. We can test this assumption later, after fitting the linear model.

Use the cor() function to test the relationship between your independent variables and make sure they aren’t too highly correlated.

When we run this code, the output is 0.015. The correlation between biking and smoking is small (0.015 is only a 1.5% correlation), so we can include both parameters in our model.

Use the hist() function to test whether your dependent variable follows a normal distribution. 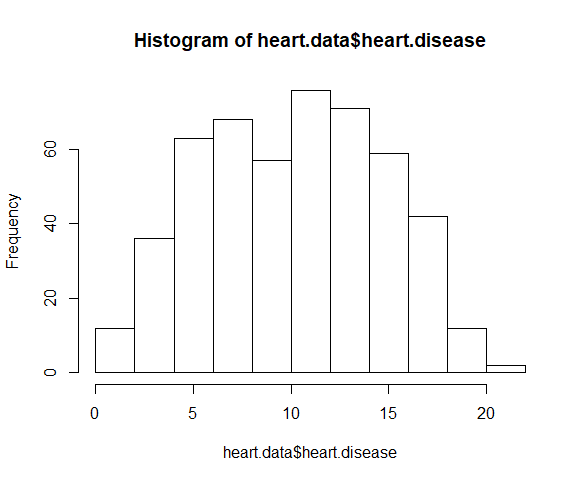 The distribution of observations is roughly bell-shaped, so we can proceed with the linear regression. 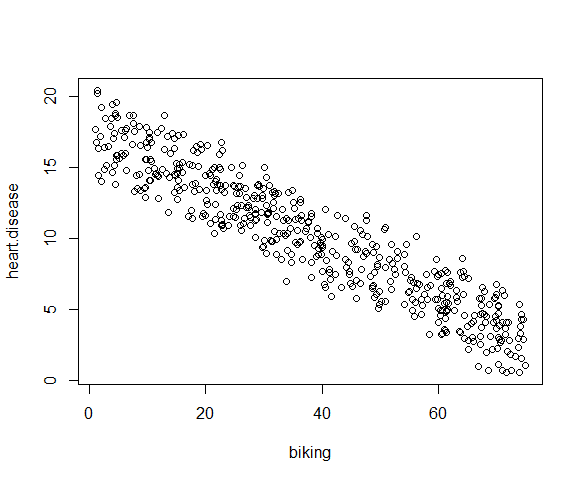 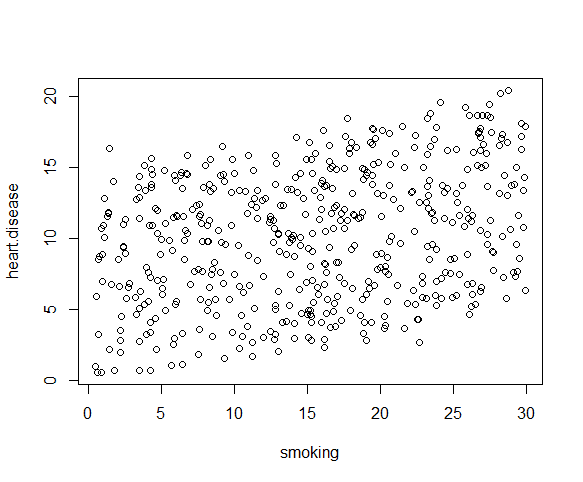 Although the relationship between smoking and heart disease is a bit less clear, it still appears linear. We can proceed with linear regression.

We will check this after we make the model.

Now that you’ve determined your data meet the assumptions, you can perform a linear regression analysis to evaluate the relationship between the independent and dependent variables.

Let’s see if there’s a linear relationship between income and happiness in our survey of 500 people with incomes ranging from $15k to $75k, where happiness is measured on a scale of 1 to 10.

To perform a simple linear regression analysis and check the results, you need to run two lines of code. The first line of code makes the linear model, and the second line prints out the summary of the model: 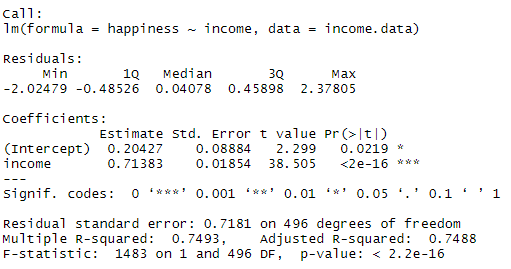 The final three lines are model diagnostics – the most important thing to note is the p-value (here it is 2.2e-16, or almost zero), which will indicate whether the model fits the data well.

From these results, we can say that there is a significant positive relationship between income and happiness (p-value < 0.001), with a 0.713-unit (+/- 0.01) increase in happiness for every unit increase in income. 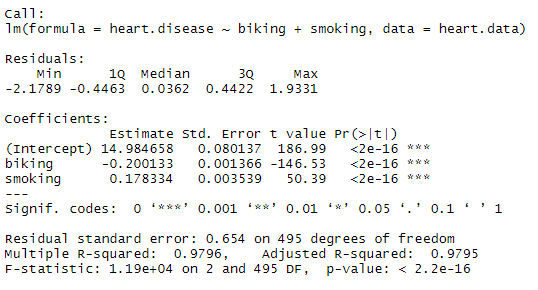 The standard errors for these regression coefficients are very small, and the t-statistics are very large (-147 and 50.4, respectively). The p-values reflect these small errors and large t-statistics. For both parameters, there is almost zero probability that this effect is due to chance.

Remember that these data are made up for this example, so in real life these relationships would not be nearly so clear!

Before proceeding with data visualization, we should make sure that our models fit the homoscedasticity assumption of the linear model.

We can run plot(income.happiness.lm) to check whether the observed data meets our model assumptions:

Note that the par(mfrow()) command will divide the Plots window into the number of rows and columns specified in the brackets. So par(mfrow=c(2,2)) divides it up into two rows and two columns. To go back to plotting one graph in the entire window, set the parameters again and replace the (2,2) with (1,1).

These are the residual plots produced by the code: 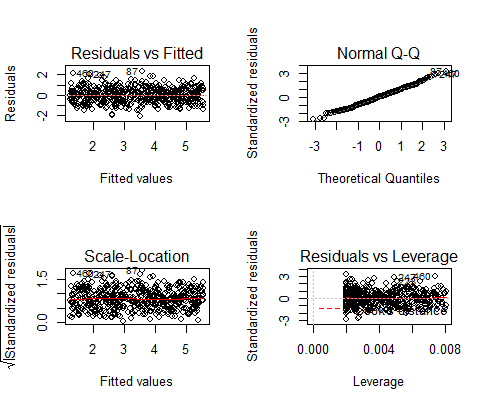 Residuals are the unexplained variance. They are not exactly the same as model error, but they are calculated from it, so seeing a bias in the residuals would also indicate a bias in the error.

The most important thing to look for is that the red lines representing the mean of the residuals are all basically horizontal and centered around zero. This means there are no outliers or biases in the data that would make a linear regression invalid.

Based on these residuals, we can say that our model meets the assumption of homoscedasticity.

Again, we should check that our model is actually a good fit for the data, and that we don’t have large variation in the model error, by running this code: 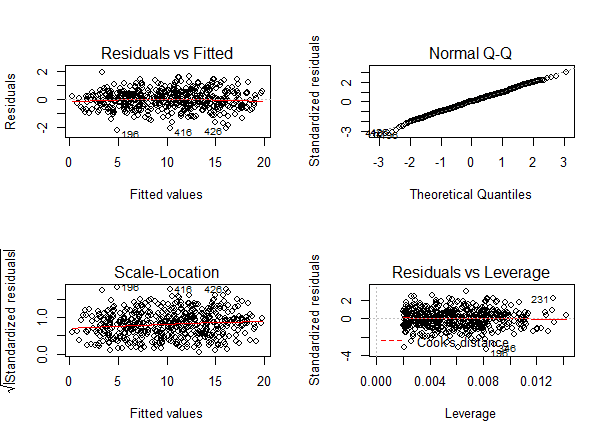 As with our simple regression, the residuals show no bias, so we can say our model fits the assumption of homoscedasticity.

Step 5: Visualize the results with a graph

Next, we can plot the data and the regression line from our linear regression model so that the results can be shared.

Follow 4 steps to visualize the results of your simple linear regression. 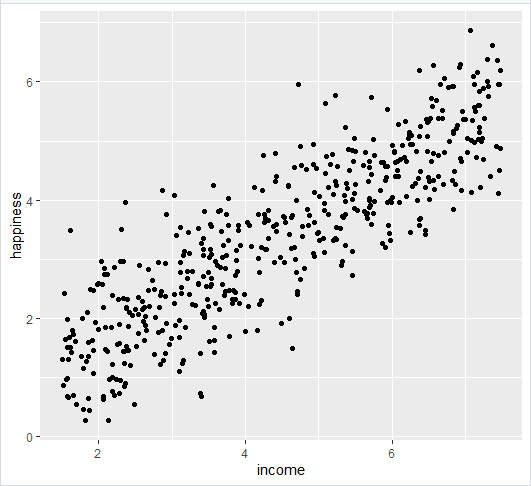 Add the regression line using geom_smooth() and typing in lm as your method for creating the line. This will add the line of the linear regression as well as the standard error of the estimate (in this case +/- 0.01) as a light grey stripe surrounding the line: 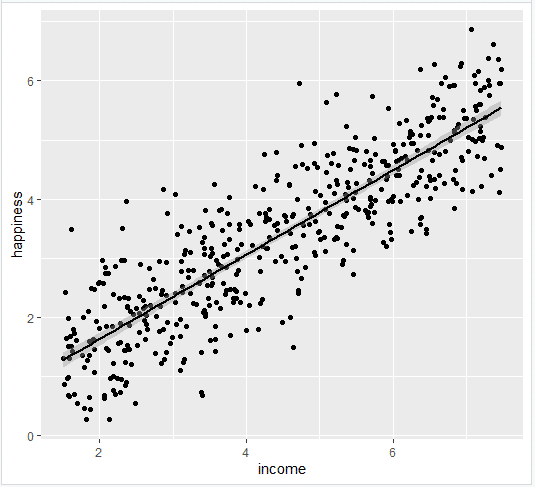 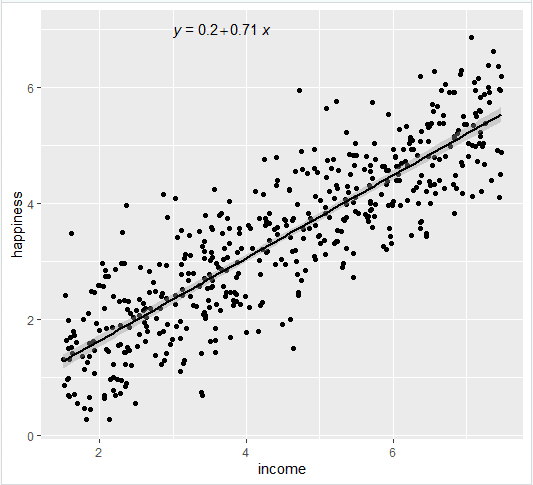 This produces the finished graph that you can include in your papers: 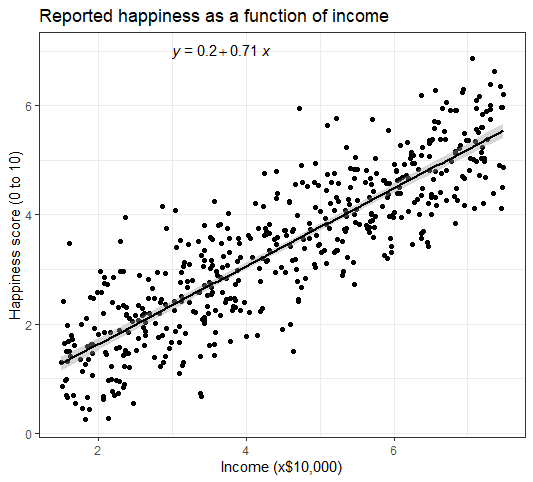 The visualization step for multiple regression is more difficult than for simple regression, because we now have two predictors. One option is to plot a plane, but these are difficult to read and not often published.

Use the function expand.grid() to create a dataframe with the parameters you supply. Within this function we will:

This will not create anything new in your console, but you should see a new data frame appear in the Environment tab. Click on it to view it.

Next we will save our ‘predicted y’ values as a new column in the dataset we just created.

This will make the legend easier to read later on.

This allows us to plot the interaction between biking and heart disease at each of the three levels of smoking we chose. 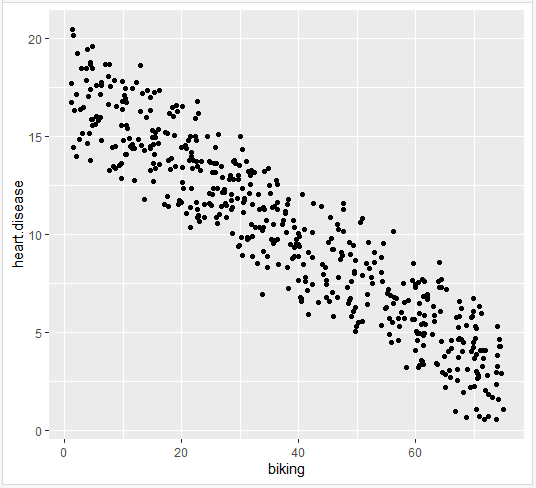 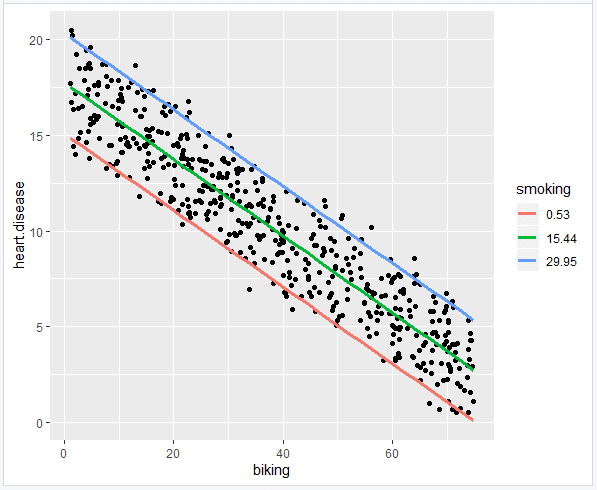 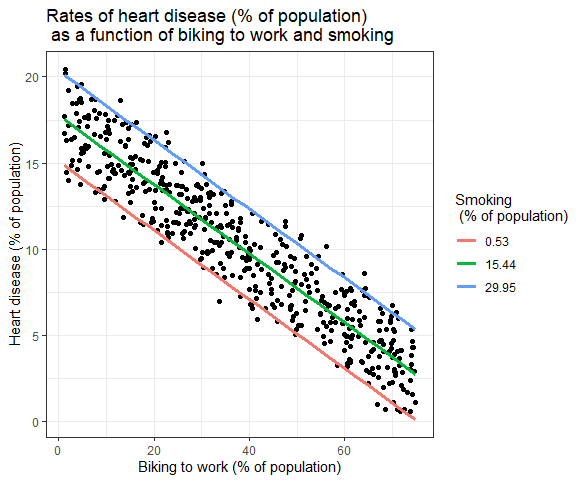 Because this graph has two regression coefficients, the stat_regline_equation() function won’t work here. But if we want to add our regression model to the graph, we can do so like this:

This is the finished graph that you can include in your papers!

In addition to the graph, include a brief statement explaining the results of the regression model.

Simple linear regression is a model that describes the relationship between one dependent and one independent variable using a straight line.
528

Statistical tests: which one should you use?

Your choice of statistical test depends on the types of variables you're dealing with and whether your data meets certain assumptions.
2109